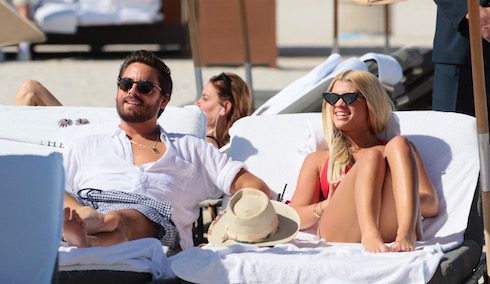 Scott Disick, last seen doubting he’s his son Reign’s father, has apparently found a way to get one over on ex-lover Kourtney Kardashian. A new report has Disick’s 19-year-old girlfriend Sofia Richie joining KUWTK for its upcoming fifteenth season, despite Kris Jenner’s wishes and Kourtney’s howls of protest.

According to the logic of the report, Scott has laid his “fan-favorite” status on the line in a battle of wills with Kris. He’s said to be refusing to film new episodes of the show unless Kris “officially tak[es] on Sofia as a cast member,” since “the alternative is losing Scott” — the two are now a package deal.

Said the report’s source, “Kourtney can’t believe it. She can barely tolerate Scott[,] let alone his new 19-year-old ‘piece[,]’ as she calls Sofia….The idea that this kid could start profiting from the family show makes Kourt feel totally betrayed, but Kris argues that she hasn’t made a bad business decision yet and that Kourtney needs to trust her.”

If Kourtney really wants to get a wedge between Scott and Kris, she should call Lionel Richie for help. Meanwhile, it’s worth remembering that Kris just landed a two-year, five-season, $150 million dollar deal for her family with Kardashian home network E!. It’s hard to believe that Scott Disick could get Kris to wilt when the ink’s still wet on her nine-figure deal.

But the latest puff piece on Scott and Sofia’s against-all-odds relationship might yield a clue as to how the 34-year-old would have pulled it off. People’s report on Scott and Sofia’s “first public appearance as a couple” last week — overlooking, of course, the fact that they’ve been flagrantly public for months — claims that Scott has a “certain undeniable appeal.”

Said an anonymous insider, “Scott has a sarcastic sense of humor that people love to be around — especially women. Despite his public persona, he can be charming and make you feel like the only person in the room.”

Whether or not rumors of Sofia Richie joining KUWTK turn out to be true, the most likely (and revealing) take of all is still the one Scott let slip on the show a few weeks ago. He seems to really believe that things between he and Kourtney will somehow work out, and that they’ll just backslide into marriage at some point over the next few years. In the meantime, it’s now possible that with Scott’s addition the next season of Keeping Up With The Kardashians will feature four new children.