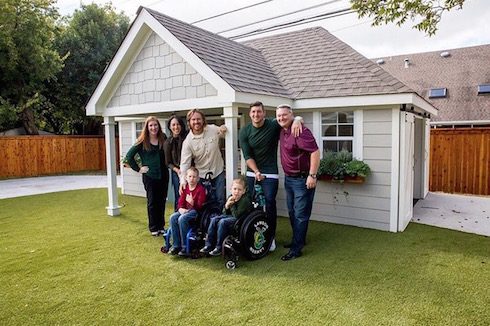 Though Chip and Joanna Gaines are known for telling heartwarming stories, the Fixer Upper Copp family episode might be the most feel-good of them all. The “new direction” for Fixer Upper that Chip teased with his New Year’s “Revelation” blog post a couple of years back has certainly been bearing fruit in Season 5: he and Joanna appear more devoted to helping people than ever before, and the Fixer Upper Copp family feature is a prime example of that.

The Copp family — dad Jody, mom Melissa, and sons Calan (9) and Lawson (5) reached out to the show through the Gainses’ charity, Magnolia Foundation, when it was just getting started. The Copps’ two boys have, as Joanna put it, an “extremely rare genetic condition that affects the mitochondria in the body.” In addition to being life-threatening, the boys’ condition “hinders their ability to stand and walk on their own, causing them to rely on wheelchairs for their mobility.”

The family had raised enough money to buy a house, but making the entire house wheelchair-accessible — including, as NBC4i explained, “including lower counter tops and appliances, wider doorways, ramps,” and a shower — required more money and expertise than the Copps had.

But, before long. Chip and Joanna got together with Tim Tebow’s charity — and began making the Copp family’s dreams a reality:

I’ve had these lockers for years and saved them because I knew one day I’d find the perfect project for them. I just love them in the Copp boy’s washroom from this week’s #fixerupper #funandfunctional #magnoliadesignandconstruction

The boys' rooms from last night’s episode were full of all the best details. Check out the blog to read why they're Jo’s favorite rooms in the Copp house! #FixerUpper (magnoliamarket.com)

But the best part was actually yet to come. Shortly before the Fixer Upper Copp family episode aired, Chip took to Instagram to let the show’s fans know he and Joanna had set up a fundraiser with the specific goal of paying off the Copps’ mortgage. And shortly after the episode aired, Chip announced that the fundraiser was a total success: the Copp family is now free of mortgage worries forever.

To me, this picture is worth a thousand words—a thousand encouragements—a thousand happy moments. BUT, there's more work to do. Let's rally together to pay off the Copp family's mortgage—Text Magnolia to 51555 to donate or click the link in our profile for more information. | photo courtesy of @hgtv

Y'all.. we did it! The Copp family's mortgage has been paid in full. Thanks for teaming up with us to get this thing finished! Their lives are forever changed because of your generosity.

Jody Copp sounded understandably breathless after he and Melissa got word the fundraiser met its goal. As he explained for Waco’s KWTX (via NBC4i), “We’re so excited [and] at the same time, we’re just still trying to breathe it all in. As far as the house, just being able to move in and what it’s provided the boys, the accessibility, it’s just been amazing.”

Melissa went a step farther. She took to Facebook to coin a brand-new word: “Dreality,” or the sensation of trying to pinch yourself awake only to realize that this really is real life:

Congratulations to the Copp family on their wonderful good fortune! Unfortunately for the rest of Joanna and Chip’s fans, Fixer Upper is still ending after the current season. We’ll have to hold our breath and hope that rumors of the show’s return in 2019 turn out to be true.