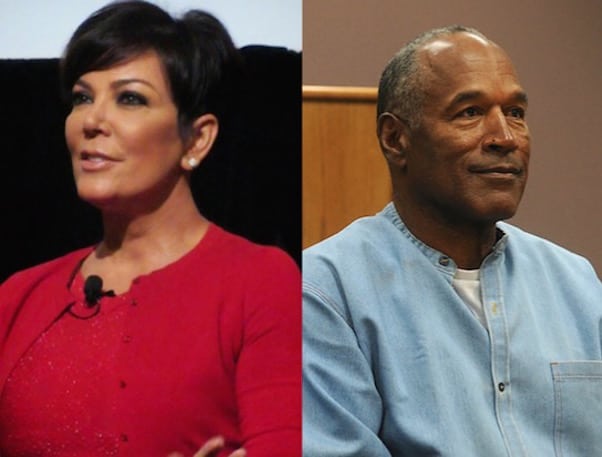 The many ugly rumors about Kris Jenner and OJ Simpson reared their heads in a surprising venue: an episode of Keeping Up With The Kardashians, over which Kris Jenner herself has final editorial say. Kris’ reaction to comments OJ allegedly made about the pair’s sex life was swift and harsh, but did nothing to actually quell the gossip.

The answer to this one is a decided no. Earlier this year, OJ’s former manager Norman Pardo seemingly torpedoed any lingering chance of a reconciliation between the two by shopping around the tale of an eyebrow-raising evening Pardo claims OJ and Kris shared together years ago.

According to the documentary Pardo made about his and OJ’s time together, Kris Jenner and OJ — by then close family friends for over a decade — cheated on their respective spouses by having sex together in a hot tub in 1990. Pardo further claimed that OJ bragged about the encounter and the specifically the violence he inflicted upon Kris, telling Pardo that the sex was so forceful (and OJ’s manhood so big) that Kris had to go to the hospital after.

It’s this story that featured on KUWTK last week. Kris called it “tasteless and disgusting,” and further revealed that she had instructed her legal team to sue the publication that ran the original story on Pardo.

“It’s just lie after lie after lie after lie,” an exasperated Kris said, “and there’s only so much that one human being can take. I think it’s just really unfair to Nicole [Brown Simpson]’s family, and my family for these stupid rumors to be flying around out there.”

Later on in the episode, Kris revealed her legal strategy. “It’s always right there, under the surface,” she said, bringing the gossip up once more. “My team has decided to take legal action because, once and for all, I have to do something about it.”

Unfortunately, the clip of the relevant Kris Jenner and OJ scenes is an autoplay, so we’ve chosen not to embed it. You can view the scenes here, via E!’s article on the episode.

(We should point out that The New York Post‘s Page Six, which appears to be the publication in question, never presented Pardo’s claims as fact. Their take makes very clear that it’s Norman Pardo and his “90-minute feature” bringing up the allegations about Kris Jenner and OJ. Furthermore, we couldn’t find any evidence of Kris Jenner filing paperwork against a major publication in the last few months — a move that definitely would have made tabloid headlines. It’s likely that “take legal action” in this case means one of Kris’ lawyers sent a strongly-worded letter to the Post, something that reality stars and celebrities do somewhat regularly. You can read Page Six‘s article here.)

Where did the rumor about Kris Jenner and OJ Khloe get started?

This one has a long history. As best we can tell, the story that OJ Simpson is Khloe Kardashian’s real father was first published in 2012 by the National Enquirer. It had been another unsubstantiated Kardashian rumor before that, started when Jan Ashley, Robert Kardashian’s second wife, said that Robert told her he wasn’t Khloe’s biological father.

Ever since then, the notion has cropped up about once a year in tabloids (this one included). The biggest resurfacing came in 2016, not long before OJ’s release from prison, when Khloe was said to have asked OJ to take a paternity test “so her truth can be revealed.” This time, the claims came from a guard at the Lovelock Correctional Center, where OJ served his sentence for armed robbery. The guard said he overheard a conversation between Khloe and OJ, and that Simpson “was upset because [Khloe] wanted him to take a paternity test, because the media is all over him…and OJ told her no.”

OJ supposedly changed his mind not long thereafter, and agreed to take the test on the condition that Khloe bring it to the prison herself. Unsurprisingly, that is right where the round of gossip petered out.

Plus, in 2016, the Enquirer ran a story alleging that Kris Jenner hid OJ’s murder weapon after the former NFL star (again allegedly) killed Nicole Brown Simpson and Ron Goldman. Per that article, Kris became an accomplice to murder largely out of boredom. So, if you weren’t already, maybe take the Enquirer‘s articles with a grain of salt.

What did the Kris Jenner and OJ relationship used to be like?

It’s almost easy to forget that OJ and Robert Kardashian actually had a long and happy friendship, one that would later included their wives. Robert was the USC football team’s “glorified water boy” when OJ was its star running back in the 60s. After college, the two became business partners.

Robert was with OJ when he met Nicole Brown in 1977; when Robert married Kris Houghton the following year, OJ was an usher at the wedding. The two couples and their growing families took vacations together; OJ regularly stayed at the Kardashians’ home while fighting with his first wife, Marguerite. Kris even let OJ talk her into calling a possibly high school-aged girl for him and asking her out. So OJ’s alleged comments in his former manager’s documentary might not be the only thing on Kris’ mind when she speaks distastefully of her former friend in 2019.

PHOTO Rob Kardashian got a tattoo of mom Kris Jenner