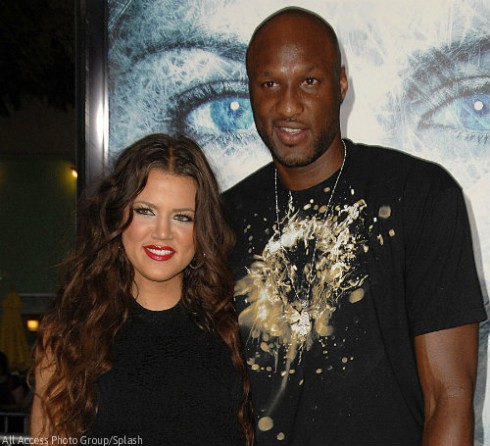 Khloe Kardashian and Lamar Odom will remain married for the foreseeable future. According to a new report, Khloe and Lamar called off their divorce while they focus on his recovery. The arrangement has legal advantages, because Khloe can help make decisions for Lamar as his wife — but it seems Khloe and Lamar were also romantically motivated.

Khloe initially filed for divorce in December 2013, but she and Lamar didn’t sign the papers to move it forward until July. Since then, the “file was sitting in a pile waiting to be processed and signed by a judge.”

In her first public statement about Lamar’s medical crisis, Khloe thanked friends, family, and fans for their support. She said, “You can never be prepared for an experience like this, but without the outpouring of love and endless prayers that Lamar has received and the strength I was given from my loved ones, it would have been difficult to endure.” Privately, insiders say Khloe vowed to remain by Lamar’s side throughout his recovery — which is a big commitment, considering the physical hurdles he’s said to face, as well as his drug issues.

As far as what this all means for Khloe’s relationship with James Harden, an insider told Us Weekly Khloe decided to put that romance on hold. Another source told People that James understands Khloe’s decision. “He is so nice and being as supportive as humanly possible given the situation,” the source close to the Kardashians said. “Lamar essentially has zero consistent family other than the Kardashians, and James understands that. The last thing he would want to do would be to add more stress to her plate.”