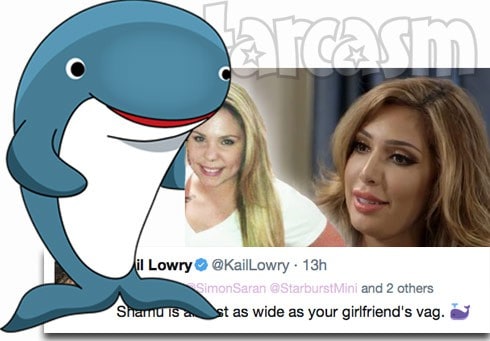 The public shade between warring factions of the Teen Mom franchise is growing darker and darker.

Teen Mom 2’s Kailyn Lowry and the undisputed top troll of Teen Mom, Simon Saran, got into a war of words on Twitter – and in the immortal words of Ron Burgndy, it escalated quickly!

Simon was out (black)fishing for a fight on social media when someone tweeted at him about alleged mistreatment of Farrah’s mini horse Starburst. The Teen Mom star burst right back, Kail got tagged and then the next thing you know Farrah Abraham’s lady parts were being compared to a whale by Kail.

After this Kail spoke with The Dirty and said, “It’s so nice to meet a grown man via twitter after talking s**t about me for no apparent reason! Whatever he was in business for must not be working out- otherwise he wouldn’t be dealing with Farrah and collecting MTV checks.”

Simon then called out The Dirty’s owner Nik Richie on Twitter because of course he did.

So far there’s been no response from Farrah, or Shamu for that matter…