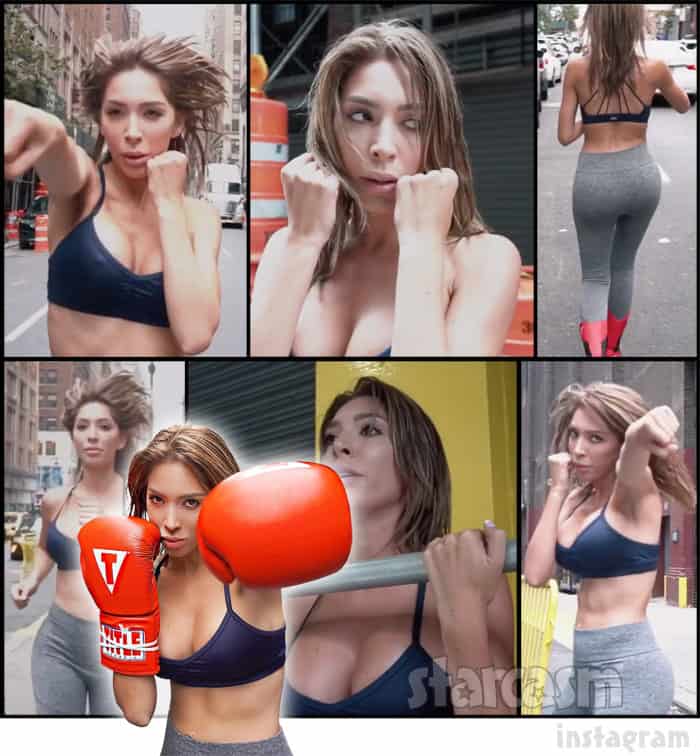 Who needs Rocky Balboa or Maggie Fitzgerald when we have reality television’s “Million Dollar Baby” in the form of former Teen Mom OG star Farrah Abraham?! The 27-year-old single mom continues her training and prep for her highly anticipated celebrity boxing match with Flavor of Love victor Nicole “Hoopz” Alexander in Atlantic City on November 10, and Farrah is clearly winning the promo war as she just released an EPIC commercial that will most assuredly punch you right in the lulz!

The video comes courtesy of videographer Jonathan Adam of LiveOutLoud Inc., and was posted just moments ago by Farrah on Instagram along with the following motivational caption:

Be STRONG Be UNSTOPPABLE AGAINST BULLYING. Join me NOVEMBER 10, Atlantic City for the biggest Celebrity Boxing match against bullying. In 2017 UNICEF announced 15 million were effected by bullying.

Boxing lifestyle has opened my eyes to a better life, no more wasted energy, focus, self control, happiness and better mental health we all can make a change November 10 Anti- Bullying Celebrity Boxing Match ??

And here is the cinematic promo video featuring Farrah Balboa herself:

From Farrah in the clip:

I am women empowerment and I will win this fight!

Wow! Nike needs to drop that Kaepernick dude and go with the much less controversial Farrah Abraham!

[If the video has you wondering whether or not it is safe for Farrah to enter a boxing ring with very large breast implants, we tackled that question with the input from a well respected expert.]

Speaking of boxing and Farrah’s boobs, she recently promoted the big fight by wearing see-through underwear for a training session that was live streamed on the adult video site CamSoda. As a bonus, Farrah reportedly gave away the four sexy outfits she wore during the sparring sessions to her biggest tippers!

Meanwhile, Farrah’s opponent Hoopz hasn’t had too much in the way of promotional hype going on. She needs to step up her game yo!