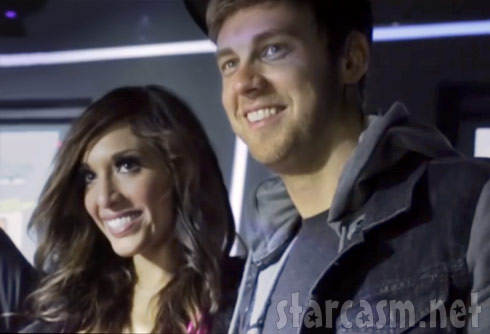 Confirming what many suspected all along, Brian Dawe exclusively revealed to Starcasm that his “relationship” with former Teen Mom Farrah Abraham was solely for the purpose of appearing on VH1’s Couples Therapy. Despite substantial monetary offers, Brian told us he backed out at the last-minute not to spite Farrah — but because he couldn’t go forward with the scheme in good conscience.

“I got myself in this situation because I was only thinking about the profit I would be making from doing this show. That was wrong,” Brian said. “In the back of my head I realized I could not participate in a TV show that would further exploit Farrah, and where I would have to lie to be involved.”

Brian explained his non-romantic relationship with Farrah began when she did an appearance at the same Orlando nightclub he was DJing. Shortly after, Farrah asked Brian — who previously appeared on VH1’s Master of the Mix — to be in a “pretend relationship” with her so she could be on a reality show.

“Farrah told me to lie to the network and tell them the relationship was real,” Brian said, adding the network offered to pay “a substantial amount of money.”

(It should be noted Farrah Abraham reportedly attempted to fake another relationship with Carson Underwood to appear on the previous season of Couples Therapy, but that fell through after Carson refused to participate. VH1 eventually went with Farrah’s Teen Mom cast mates Catelynn Lowell and Tyler Baltierra.)

To add to their relationship’s credibility, Brian agreed when Farrah informed him a paparazzo friend was going to take their pictures while they were at a park.

“I had no idea what these photos would be used for, but assumed it would be for her to promote or market our relationship,” Brian explained of the October photo shoot, which included the photo above, posted by @FarrahAbrahamOfficial on Instagram. “She told me after the shoot that she sells the photos to various tabloids… I was astonished at the amount of media coverage it received.”

By that point, Couples Therapy plans were confirmed — and Brian intended to go along with the show until the moment he was set to board the flight to Los Angeles.

“I checked my bags and got into the airport security line. When I was in that line it really hit me what I was doing,” Brian said. “I stepped out of the security line and made a life changing decision to stand up for what I believe in and turn down the check I would be receiving for my appearance on this show.”

Immediately after leaving the airport, Brian sent an email to Couples Therapy producers, informing them he couldn’t go forward. 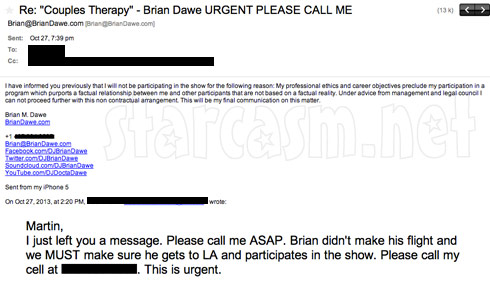 Despite clearly stating his relationship with Farrah wasn’t authentic, Brian said Couples Therapy producers offered him an additional $15,000 to participate. He then ceased communication with the production company, network and Farrah.

“I have not spoken with Farrah since she sent me a text after I did not show up on set saying she wishes me all the best and to take care,” Brian said, indicating some of the emotional phone calls Farrah was shown making during an extended trailer may have been fake. (In the trailer, Farrah tells Dr. Jenn Berman, “I think he purposely did this to hurt me.”)

As far as claims that body language experts determined Brian and Farrah’s relationship was real, Brian noted that was a waste of money — since he explicitly told them his romance with Farrah wasn’t authentic.

“I believe the producers are claiming they hired an expert to try to justify the story line,” Brian said. “The producers knew this relationship was fake. I notified them that it was not real before taping began. I really hope that the producers didn’t tell Dr. Jenn Berman they had this knowledge, and if they did inform her then there are some serious ethical issues with that situation.”

Promotions for Couples Therapy seem to suggest his name will get dragged through the mud during the season a Farrah appears to blame him for standing her up. He accepts his role in the whole thing, but added he just wanted to set the record straight…

“My only purpose for coming out against it is to clear my name and to take a public stance against the culture of exploiting people through reality television and the media. Reality TV is about as far from reality you can get.”

Couples Therapy premieres on VH1 on Thursday, Jan. 2 at 9/8c.

Farrah Abraham was faking her cry face, and other revelations from Teen Mom Confidential