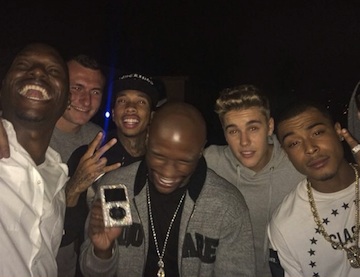 The young men enjoyed a happy time from Monday into Tuesday.

Police were called to Bieber’s condominium early Tuesday because of noise complaints. Bieber, who is twenty years old, obliged the officers by turning the music down.

Later on in the evening, police were called back to the condo. Apparently, though, the second offense was due to fans of the young pop star, who had massed outside the gates to his home and were shouting and making loud noises.

Manziel, 21, was selected by the Browns with the 22nd overall pick in the 2014 NFL draft. He is expected to compete with teammate Bryan Hoyer for the starter’s job at quarterback, though few reliable NFL observers give Manziel much of a chance to win the job.

Also in attendance at the gathering was undefeated and welterweight champiton boxer Floyd Mayweather, Jr., who is 37 years of age. Mayweather is also well-known for being, according to Forbes and Sports Illustrated, the highest-paid athlete in the world.

What do you, the viewers at home, think? Is this just another example of Johnny Football having a harmless good time? Of Justin Bieber flaunting his celebrity for the world to admire or disdain? Or is it something else entirely? Let your thoughts be known by leaving a comment below. 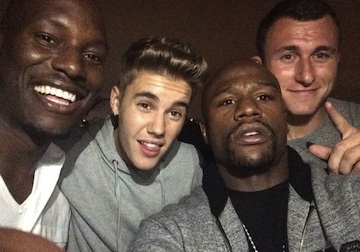