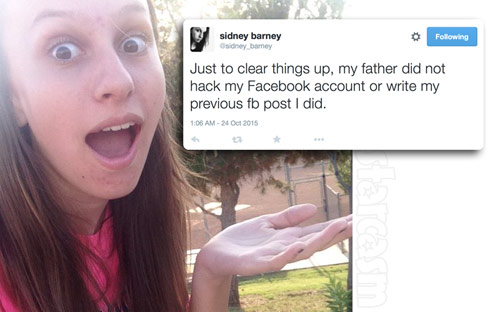 It has been quite a headline-generating year for The Real Housewives of Orange County as Brooks Ayers continues to battle allegations that he faked his cancer diagnosis, and Shannon and David Beador try to keep their relationship intact after his high-profile affair. Never one to be left in the wings, Tamra Judge is now center stage in the tabloid mediaverse after her emotional breakdown on the Reunion over losing custody of daughter Sidney to ex Simon Barney reignited the couple’s feud online.

This time around, however, it’s not just Tamra and Simon battling it out via social media as their 17-year-old daughter Sidney Barney is speaking out for herself! Or is she?

After a lengthy Facebook post calling her mother Tamra “mentally/verbally abusive and not a mother to me” garnered a lot of attention among fans and the media, some questioned whether or not it was actually Sidney who made the post. Soon after the validity of the Facebook account and the post were called into question, both were deleted — adding fuel to the speculation fire.

This is my real Twitter and was my real Fb but my Fb got hacked and they changed my pass and deleted my post. pic.twitter.com/QtYp7XrqXu

It seems clear that the Sidney Barney Facebook and Twitter accounts are run by the same person, but the question still remains: Is it really Sidney?

Both accounts were created very recently, and so far, Sidney has not offered up any sort of proof in the form of a brief video or even a photo with the account urls. In addition, Simon Barney has not made any posts to verify that it is actually Sidney — something it seems like he would do if it was actually her wanting her thoughts known.

Another red flag for me is Sidney’s claim that her Facebook account was hacked. What seems more likely is that it was reported, either by Tamra, Simon, or one or more of the thousands of “concerned” fans. If that was the case, and the account was suspended by Facebook pending verification, then why wouldn’t Sidney just say that?

What a mess! But you know you want to see how this turns out, so stay tuned!