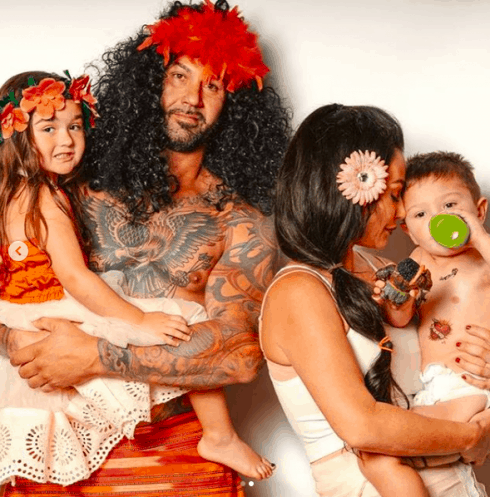 Even though Jenni “Jwoww” Farley filed for divorce from her husband Roger Mathews, the whole family got together for their annual matching Halloween costumes, with four-year-old daughter Meilani and two-year-old son Greyson.

In the past, the family has dressed up like The Incredibles and The Addams Family. This year’s choice? Characters from Moana — which is Greyson’s favorite movie.

“We always try and get into the spirit of Halloween every year,” Roger explained on Instagram, captioning photos taken by Anthony Serrantonio. “It’s Meilani’s favorite holiday after all. Bubby’s is Thanksgiving cause there is a humongous dead bird on the table he can eat and lots of other yummy stuff. Except cauliflower. F–k cauliflower.”

We always try and get into the spirit of Halloween every year. Its Meilani’s favorite holiday after all. Bubby’s is Thanksgiving cause there is a humongous dead bird on the table he can eat and lots of other yummy stuff. Except cauliflower. Fuck cauliflower. #Moana Photos/videography by @anthony.serrantonio Makeup by the kindest soul ever @jaimenardiello Once again our amazing outfits and all of Meilanis dresses over the years done by @bellethreads

Behind the scenes of the Mathew’s annual Halloween photoshoot ? this year we dressed up as Bubby’s favorite movie – Moana! Check out the full video #linkinbio costumes by @bellethreads

Roger has been adamant about hoping to win Jwoww back. Even if the divorce goes through, though, it looks like the two of them are committed to staying a tight-knit family for the sake of their children.

Roger and Jwoww just celebrated their third wedding anniversary earlier this month, and Roger took to Instagram to pay tribute to the couple’s relationship. “8 years together total. 3006 days together,” he shared on October 18. “Not one of them was a flawless day. Not one of them would I change.”

VIDEO: The Little Couple adopted a child with dwarfism from China

THE BOBBY BROWN STORY – Did Bobby Brown date Janet Jackson and kick her out of a hotel naked?