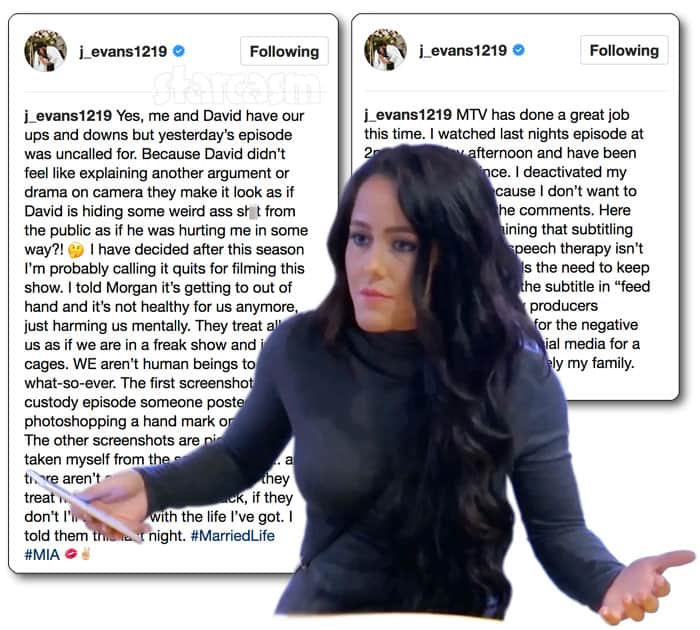 Jenelle Evans has announced plans to quit Teen Mom 2 after watching Monday night’s episode. “Yes, me and David have our ups and downs but yesterday’s episode was uncalled for,” Jenelle posted on Instagram. She expressed her anger over two particular scenes, and shared text message conversations with producers over whether or not to subtitle her son Kaiser, who is in speech therapy.

Early in the episode, Co-Executive Producer Kristen and photographer Erin arrive at Jenelle’s house to film, but Jenelle has been texting them both letting them know that she and David have been arguing and do not wish to film. Jenelle then texts that David has given the crew five minutes to get off the property before he calls the police. Kristen and Erin seem surprised and frustrated, but they leave.

The camera crew return the next day and Jenelle and David are essentially acting like nothing happened the day before. Erin asks them about their argument, and David gets a bit frustrated. He insists that the crew should focus on the positives and not the negatives before announcing he needs to go to the hardware store and then leaving.

“Because David didn’t feel like explaining another argument or drama on camera they make it look as if David is hiding some weird ass sh!t from the public as if he was hurting me in some way?!” Jenelle wrote in response to the scene. “They treat all of us as if we are in a freak show and in cages. WE aren’t human beings to @mtv what-so-ever,” she added.

Jenelle’s frustration over David’s portrayal was amplified by a photo circulating online that allegedly shows marks on Jenelle’s arm during a scene from a previous episode. Jenelle shared the photo as well as additional screen caps from the same episode in which there are no marks on her arm:

“The first screenshot of the custody episode someone posted photoshopping a hand mark on my arm,” Jenelle explains in the caption. “The other screenshots are pictures I’ve taken myself from the same episode… and there aren’t any hand marks.”

The other scene from Monday night’s episode that upset Jenelle was one in which she and David were working on their “Save the Date” photo. As the couple posed for photos, Kaiser was throwing a huge tantrum while playing with his brother Jace. At one point he is shown screaming something that is hard to make out, but MTV provided the subtitles: “Feed me!”

Jenelle posted what she says are text messages between her and Teen Mom 2 producers about Kaiser’s speech issues, and she included a photo of the document stating he has received speech therapy and it is recommended that he continue:

MTV has done a great job this time. I watched last nights episode at 2pm yesterday afternoon and have been very upset ever since. I deactivated my accounts mainly because I don’t want to even begin to read the comments. Here are texts of me explaining that subtitling my son when he has speech therapy isn’t right at all, but MTV feels the need to keep it in their story and put the subtitle in “feed me”. I’ve blocked all my producers numbers. I will not stand for the negative sh!t anymore. I’ll be off social media for a while to be focusing on solely my family. @mtv

Not helping things at all is the fact that the @TeenMom Twitter account posted a gif of the scene with Kaiser screaming “Feed me!” during last night’s episode and laughed it off with the caption “Literally me” with a pizza slice emoji. Chelsea Houska’s dad Dr. Randy Houska took exception to the tweet and called @TeenMom out over it: 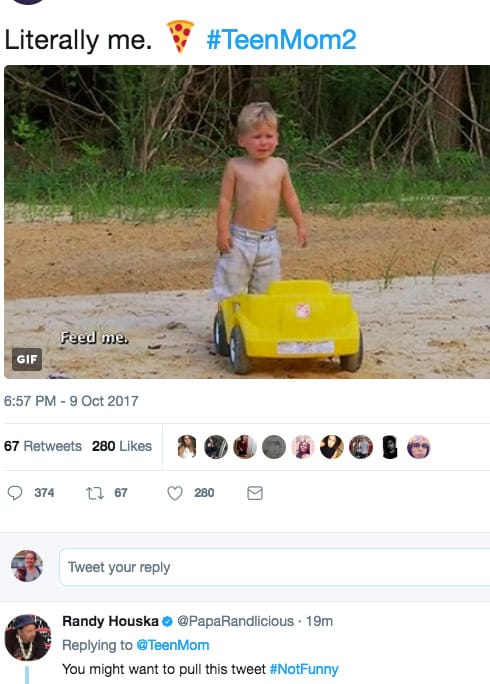 As mentioned above, the most recent episode was potentially the last straw for Jenelle. “I have decided after this season I’m probably calling it quits for filming this show,” Jenelle says. She does leave the door open, though, if producers are willing to address her grievances over editing. “Once they treat me with respect I’ll be back, if they don’t I’ll be happy with the life I’ve got. I told them this last night. #MarriedLife #MIA ?✌?”

I assume that Jenelle and MTV will be able to reach some sort of compromise, as they always seem to do. I simply cannot imagine Jenelle actually walking away from such a lucrative deal, and no matter what your opinion of Jenelle may be, you have to admit that the show would not be the huge success that it is without her — so MTV is equally motivated to make things work. (I do think that adding Briana gives producers a little flexibility as far as negotiating contracts and potentially letting a cast member go, but it simply cannot be Jenelle. Right?)