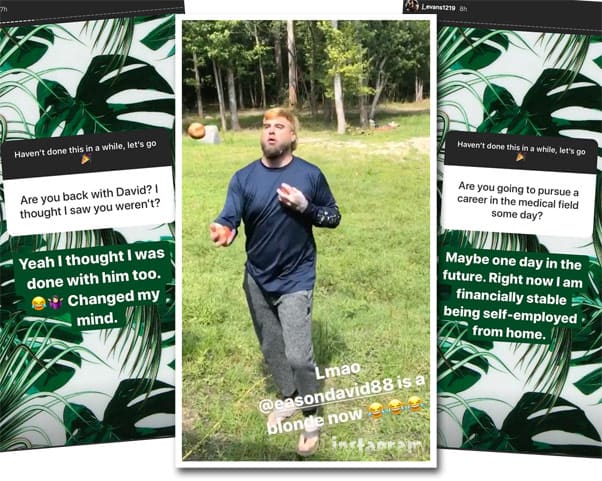 It’s been one month since disgraced former Teen Mom 2 star David Eason put his pistol-whipping skills to the test in a Thunderdome duel with a gay guy friend of Jenelle’s, who was trying to help her move out and was armed with one of David’s homemade railroad spike coat racks. After mutual assault charges were filed, Jenelle realized the error of her ways yet again in regards to leaving her abusive spouse. So, she elected to return to The Land and her blissful life of bikini butt-shaking Tik Tok videos and being a nurturing caretaker for hundreds of unsold eyebrow kits.

With Jenelle and David being in one of their many post-police involvement honeymoon phases, her social media followers have been treated to numerous idyllic updates on life on The Land — including a video revealing David’s dramatic new look!

“Lmao [David] is a blonde now,” Jenelle captioned a clip posted to her Instagram story earlier today. In the video, David can be seen with blonde hair as he juggles apples while sporting sweat pants and flip flops. His Amish-inspired moustache-less beard remained the same.

Here are a few screen grabs of David, who seems to be embracing his infamous “Vanilla Isis” nickname: 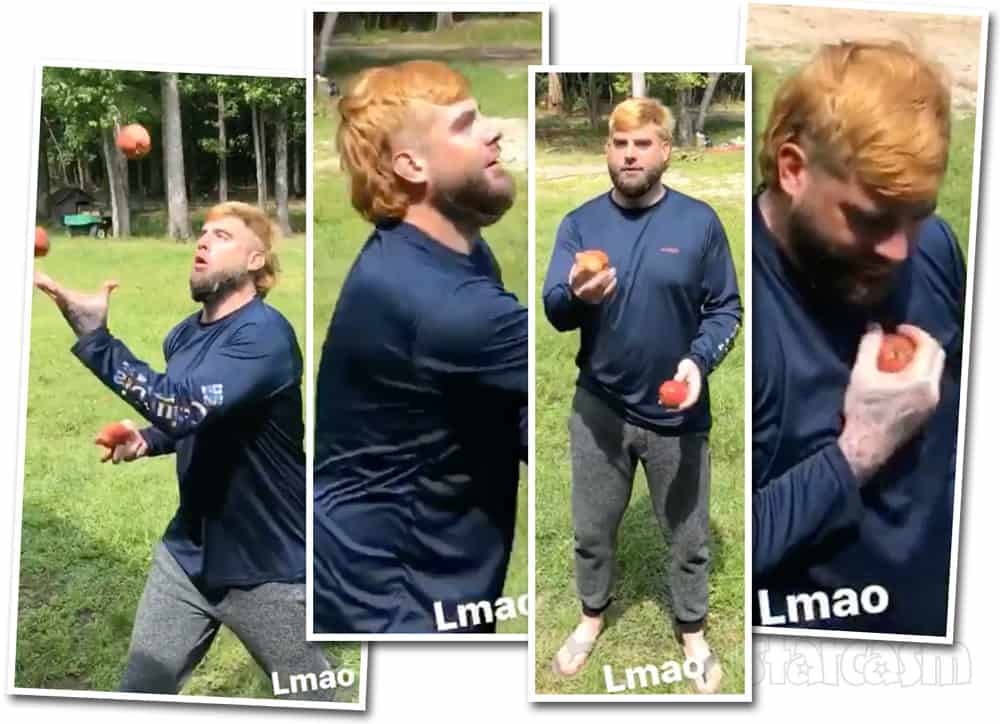 Just before sharing the clip of Uncle Blonde Top, Jenelle did a Q&A with her Instagram followers. She tackled a wide array of topics, including her most recent change of heart regarding David, a terrible review of her JE Cosmetics eyebrow kit, and an image going around online featuring David with a hot blonde that isn’t himself. She also re-asserted her very passionate desire to continue sharing her life with the public while also wanting everyone to just leave her alone.

QUESTION: Do you miss being on Teen Mom 2?

JENELLE: Yes, to continue to share my story with everyone. Everything just stopped. 😥 But also NO, because of the drama that came along with some of the people I had to work with.

Please come back on tv!!

Would you ever do your own spin off show? I’d love that 😍

How’s your relationship with Barbara doing?

Honestly, A lot better since being off the show.

How is parenting with Nathan and your mom going currently?

How’s things in your life now?

Going smooth for now, I hope it stays that way.

David has never cheated on me, lol 🤷🏻

Did you see the pic Britt Walker posted of her and David?

This is the girl David was with while Jenelle was in Nashville 👀 Trouble on the laaaaaand again?

Who is this girl, Brittany, David was with?

An obsessed fan that posted an old pic with David when we were separated 🤷🏻 she has posted it before but deleted it. Why is she posting it again? Have no idea. Weird…

Are you back with David? I thought I saw you weren’t?

Yeah I thought I was done with him too. 😂🤷🏻 Changed my mind.

I know this is THE question, but why you are [sic] still with David?

I love David and if the issue is something we can workout as a family then I’m going to do so. There’s two sides to every story. Both parties were in the wrong, in my opinion.

How are you earning money atm?

Just know I am financially stable. There’s a lot of diff ways to make money online from home these days.

Are you going to pursue a career in the medical field some day?

Maybe one day in the future. Right now I am financially stable being self-employed from home.

#TeenMom2 @PBandJenelley_1 defends her qualifications to homeschool stepdaughter Maryssa, reminds us she "graduated medical school" https://t.co/zhPpKbq40p PLUS, a new report reveals the reason why Maryssa was removed from the private school she was attending.

A customer confirms that Jenelle is selling moldy products! @tmmamadrama reported back in May that her shipment boxes dated back a full year 😬 (Swipe) #teenmom2

What’s your response to your eyebrow kit’s newest review?

Before shopping [sic] the kits are inspected inside and out. Our kits have a fuzzy velvet texture on the inside packaging. During shipping the fuzz known to get into the wax. It is not dirt and definitely clean. The kit was perfectly fine when shipped.

Your tick tock videos are really good – have you ever taken dance classes?

Haha, thanks! I use to do a lot of cheerleading growing up and a little hip-hop. 💃🏻

What’s new on The Land?

I need more chickens. Our goat is pregnant again, lol. Tried to grow veggies this year but my chickens dig up the seeds and eat them! 😫

How do you react to the haters / negative comments people post?

Jenelle Eason shares photos after nose surgery, explains the procedures she had done