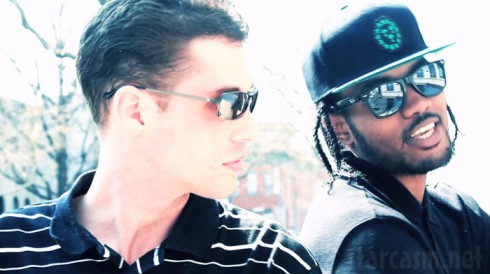 On next week’s episode of Teen Mom 2 we see the return of Jenelle Evans’ ex, and father of Jace, Andrew Lewis as his paternity gets called into question. The episode was filmed more than a year ago and it seems Andrew has been working hard to capitalize on his brief time back in the spotlight… by recording a rap song! About Jace!

Andrew, or as he apparently likes to be known in the hip hop world, Drew, recorded “A Song For Jace” as a collaboration with rapper Ca$h Bilz (I guess one of the things Andrew and Jenelle had in common was their love for performers who use a dollar sign instead of the letter “S” in their names), and the dope duo even went as far as to make a music video and post it on Youtube!

So here it is y’all, Jenelle Evans’ ex Andrew Lewis’ rap music video “A Song For Jace” with Ca$h Bilz. (No you simply CANNOT make this stuff up!)

You just can’t deny the artistry and poetic genius of lines such as “I love you like cooked food!” And of course we have all of the lyrics for you 🙂 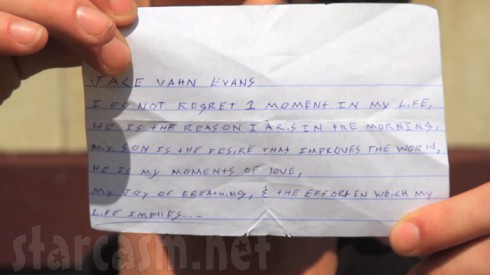 Jace Vahn Evans
I do not regret 1 moment in my life,
He is the reason I aris [sic] in the morning,
My son is the desire that improves the world,
He is my moments of love,
My joy of breathing, & the effort in which my
life implies…

For those of you who have managed to make it this far, I have a HUGE surprise for you! We are EXTREMELY proud to announce “A Song For Andrew,” a collaborative response to Andrew’s rhymes featuring $tarca$m and none other than Bab$ Evan$ herself! That’s right, here are the lyrics co-written with Twitter sensation @BabsEvansMTV:

Oh muh Gahd
if it ain’t Andrew
With all of Jenelle’s boyfriends
I done forgaht about you.

You tahlkin crap now
but where were yah then?
When Jace needed a daddy
yah wah passed out ahn gin!

Yah ain’t nothin but ah boozah!
a deadbeat loozah!
Oh and by the way,
Yah rap sahng is ah snooozah!

Me and Jace are ahlright
We don’t need yah around
So stay down in Flahriduh
and put the microphone down!

If you comin’ to NC
Yah bettah pray to the heavens
Cahs your abaht to be destroyed
Yah frickin f***in’ with Babs Evans!

If we could get Barbara to record that on video we might actually have to shut the doors here at starcasm, because what could possibly be more awesome?!?

Thanks again to @BabsEvansMTV for her masterful phonetic skillz. And if you’re a Babs fan, or think you might become one, then be sure to check out our interview with her!

On an interesting side note, Andrew’s foray into hip hop makes it two Teen Mom 2 daddies who have recorded a rap song about their son! Kailyn Lowry’s significant other Jo Rivera, aka N.I.C.K. B., aka Nerd In A Cool Kid’s Body, has recorded a few rap songs, including one about parenting, and one about gettin’ jiggy with his main squeeze Vee!

Although I doubt Corey Simms will be spittin’ rhymes any time soon, we might see something with a country vibe from him — sort of like the ode to his hat. Now Adam Lind on the other hand, he’s probably in the studio right now working on “A Song For Aubree” rap!