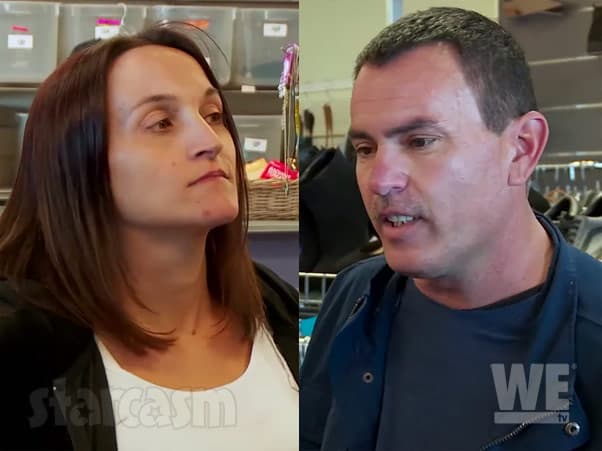 Love After Lockup star Shawn Osborne is smitten by prison kitten Destinie, and he states on the show that he has already spent “thousands” of dollars on her while she has been incarcerated. Despite never having met Destinie in person, Shawn is also willing to post her $50,000 bond, which equates to $5,000 in non-refundable cash.

What’s unclear is where Shawn is coming up with all this money given his extensive history of financial issues that includes filing for bankruptcy, multiple evictions, and even his ex (and mother of his six children) Kelly launching a GoFundMe last month in hopes of raising money so that she and her children wouldn’t get kicked out of their house.

The number of civil court filings against Shawn and his ex Kelly is so large that I won’t bother listing them individually. Some relatively recent examples include the couple filing for bankruptcy together in 2014, Shawn being sued by the towing company he worked for in March of last year, and an eviction filing against Shawn in April of this year. (The April eviction was later dismissed — it’s unknown if that was a result of allowances being made due to the coronavirus pandemic.)

UPDATE – Kelly expressed her frustration on the July 24 episode because Shawn never married her, but there are numerous legal filings (including the bankruptcy) that refer to her as “Kelly Osborne.” I could find no record of a marriage or divorce, however. She has since reverted to using her maiden name.

As I stated above, Shawn’s ex Kelly has been quite open with her financial issues by using GoFundMe to raise money for her and her five children that still live with her. The couple’s oldest child is currently 21 and has moved out of the house after enlisting in the Army — which also inspired its own online fundraising campaign by Kelly. Actually, Kelly has launched at least as many GoFundMe campaigns as she has children!

Here’s a timeline of her crowdsourced fundraising efforts via GoFundMe:

My oldest, my first born joined the Army. He is a Combat Medic. He has been in basic training since Aug. 5th and will be graduating Oct. 18th. I desperately want to be there for his graduation, as we are very close and I have been his biggest supporter, and am so proud of the man he is becoming. His graduation is in Oklahoma, and we live in Arizona. I am a single mom of 6 kids and low income. I need to come up with air fare, car rental and hotel expenses for over night as they are doing family day the day before on Oct. 17th.

I am not one for asking for help, but this would mean the world to me and him if I could be there. I don’t want to miss one of the most important days of his life, nor him to be there all alone. Family is super important to us. So any and all help would be greatly appreciated. We would be so grateful for any help, even thoughts and prayers as well.

Me and my 5 kids are sadly gonna be evicted from our home. My ex who pays the rent lost his job 6 weeks ago and we haven’t been able to pay May and June’s rent. We have to come up with $2000 to be able to stay in our house. I do not want my kids to suffer and be homeless. I am heartbroken right now and don’t know what to do. Anything that anyone can do to help would be greatly appreciated.

A huge part of Shawn’s story line on the show this season is the potential of Destinie catfishing him, a story line that we have previously reported on and pretty much dismissed. However, the real story might be whether or not Shawn is financially catfishing Destinie! Something tells me that she is NOT going to be pleased to find out Shawn has no money — or less.

In one of the preview trailers for the season, we see Destinie assaulting Shawn. I’m going to predict that happens after she finds out about his actual finances. That is purely speculation though. To find out the actual reason, be sure to tune in to new episodes of Love After Lockup airing Friday nights at 9/8c on WE tv!