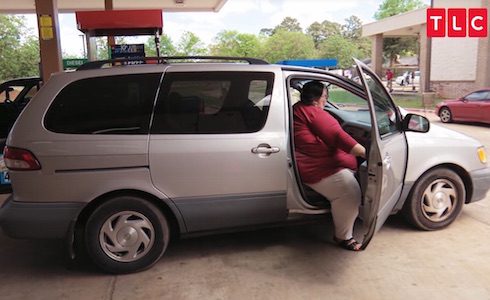 The My 600 Lb Life Jeanne episode depicts a woman seemingly at the end of her limits, for whom things somehow keep getting worse. Unfortunately, the problems and tragedies continue to mount during Jeanne’s debut, and by episode’s end she’s done something no other My 600 Lb Life cast member ever did.

Fair warning — there are spoilers ahead. We’ll begin with TLC’s synopsis for Jeanne’s story, which actually contains the episode-defining tragedy without giving away anything specific:

Jeanne lives in an unhygenic household with her mother and schizophrenic father. At well over 600 lbs., Jeanne might never get weight loss surgery as she runs into several obstacles, especially after an unexpected death in her family.

At the outset of the My 600 Lb Life Jeanne episode, Jeanne isn’t given a peak weight. The 39-year-old has been dangerously obese for years, and her obesity began when she was a little girl.

According to Jeanne’s mother, Barbara, Jeanne was five years old when she began stealing unhealthy snacks from her abusive grandmother, as a form of retaliation. A year later, Jeanne was molested by her mother’s then-boyfriend, and food became a way to find solace. Barbara laments that she took Jeanne to numerous weight loss specialists over the years, but “None of that helped.”

As is so often the case with My 600 Lb Life cast members, just moving around is agony for Jeanne. Though she only lives four hours from Houston by car, her journey to Dr. Now’s office is no less fraught than the travel horrors suffered by people who have to travel by plane:

“I’m in so much pain right now,” Jeanne says, in a voiceover. “I don’t know how I’m going to make it three more hours. I just wish we had a bigger vehicle, or that there was somewhere I could get out and rest. But I can’t walk far. And I’m not interested in being a freakshow. I can see people already staring at me, and probably making comments about how big I am. And I don’t need to deal with that. So I’m just not getting out. Because people are jerks.”

While Jeanne’s mother is away buying snacks, Jeanne thinks she sees a group of people mocking her from across the gas station parking lot. When Barbara returns, Jeanne gives vent to her frustration, nearly breaking down in the process.

“I hate people,” Jeanne says. “They think that having some kind of disability — that it’s funny, you know, because they’re normal, or whatever. You know? But karma’s a bitch, and it will come back on them. But I try my best not to let them get to me. But when they’re sitting over there talking, and walking around and everything — I want to tell ’em, ‘If you want to take a picture, f*cking take a picture.’

Things get no better for Jeanne once she and Barbara make it to Houston. Just as Jeanne begins her weight loss journey in earnest, Barbara falls ill and has to undergo surgery of her own. Then, while Barbara is recovering, she and Jeanne realize it’s been an unusually long time since they’ve heard from Jeanne’s father. They contact the authorities to have a wellness check performed — but the check reveals that Jeanne’s father passed away in his bed at home.

The combination of her mother’s frail health and her father’s death is too much for Jeanne. After six months, the My 600 Lb Life Jeanne episode comes to a premature end when Jeanne voluntarily ends her treatment and leaves Houston to return home.

“I talked to my mom and we both decided we’re not going back to Houston,” Jeanne reveals. “With my dad gone, we can’t leave the dogs alone and I can’t go by myself. So I’m just not in a place to do Dr. Now’s program. I know I have to lose weight and I don’t have a lot of time if I don’t, but I don’t know what to do about it right now.”

Dr. Now does recommend a therapist to Jeanne, and Jeanne does continue addressing her mental health at episode’s end. But she doesn’t appear to have any public social media presence (though that may change once her episode premieres). And given the circumstances under which her first episode concluded, it’s unlikely that Jeanne will be filming a follow-up any time soon.

For the time being, at least, it sounds like Jeanne is willing to restart her weight loss journey at a more stable point in the future.

“I have faith that there’s an option out there for me, and that somehow I’m gonna find it,” Jeanne says, at the conclusion of her episode. “It’s not over yet for me. This door may be closed, but another one will open. I’m just waiting for my next opportunity. And I have to trust that if I’m patient, I’ll get the chance to work hard to have the life I want.”

TLC has made the My 600 Lb Life Jeanne episode available for streaming early: you can view it in its entirety here.