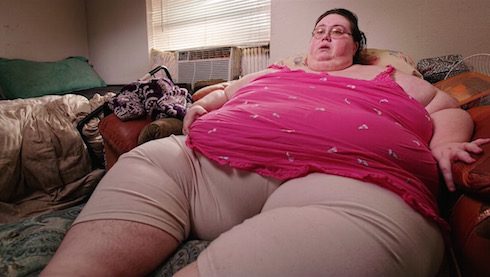 Reactions to her debut episode have been shocked, concerned, and disbelieving: My 600 Lb Life‘s Jeanne Covey has easily gotten the biggest response, positive or negative, of any Season 7 cast member so far. But how is Jeanne doing today? How are she and her mother Barbara coping with the unexpected death of Jeanne’s father? We’ve got a bit of news about the two women — plus an update on the nine dogs that Jeanne, rather controversially, keeps in her home.

As we wrote last week in our sneak preview of her episode, Jeanne was already poised to shock My 600 Lb Life fans after doing something no one else who’d ever been on the show had done. After Jeanne’s father Larry passed away at home while she and Barbara were in Houston working with Dr. Nowzaradan, Jeanne decided that she was in too precarious a mental place to continue Dr. Now’s weight loss program. She returned home to Big Sandy TX after six months, having abandoned her weight loss efforts.

Jeanne did get the phone number of a therapist from Dr. Now before heading home (though the years of trauma she’s suffered will almost certainly need in-person therapy to be dealt with properly). And, though things looked grim at the time, she did acknowledge the possibility of a future episode featuring My 600 Lb Life‘s Jeanne Covey, letting a little light shine though as her debut episode came to a close:

I have faith that there’s an option out there for me, and that somehow I’m gonna find it. It’s not over yet for me. This door may be closed, but another one will open. I’m just waiting for my next opportunity. And I have to trust that if I’m patient, I’ll get the chance to work hard to have the life I want.

Still, Jeanne’s episode ended with more questions than answers. And Jeanne further differs from her My 600 Lb Life Season 7 cast mates in another regard: unlike, for example, Brianne and Brandon, Jeanne is not very active on social media. (She hasn’t used her Twitter account in over eight years.) But we’ve been able to find out a few things about how Jeanne and Barbara have been doing since filming for their episode wrapped.

For starters, though we can’t be completely sure, it looks like Jeanne may have started the process of finding new homes for some of her dogs. When her birthday rolled around late last year, Jeanne asked her friends and family to donate to the Old Friends Senior Dog Sanctuary, an organization dedicated to fostering and finding forever homes for older dogs specifically.

However, the OFSDS’ foster area is limited to central Tennessee and southern Kentucky (the company is based in Nashville), so it’s also possible that Jeanne was simply trying to use her birthday for good. Unless a friend or relative trucked some of Jeanne’s dogs the 600 miles from Big Sandy to Nashville, it’s likely that all nine of the pups are still living with Jeanne and Barbara.

Additionally, we were able to find the obituary for Jeanne’s father and Barbara’s husband Larry. The late Lawrence Charles Corrao died on December 14th of last year; according to the obituary, he was 61 years old. Larry was born in Cleveland in 1957, and is survived by a fair number of relatives:

Given that almost every My 600 Lb Life cast member seems to have the option for a Where Are They Now? episode in her contract, it seems at least possible that we’ll get an official follow-up from Jeanne within the next couple of years. However, her participation more than other cast members’ seemingly depends on Jeanne’s mental state and general hygiene, so it’s unlikely that the odds of a second episode are any better than so-so.

In the meantime, you can revisit Jeanne’s first My 600 Lb Life episode here, via TLC.