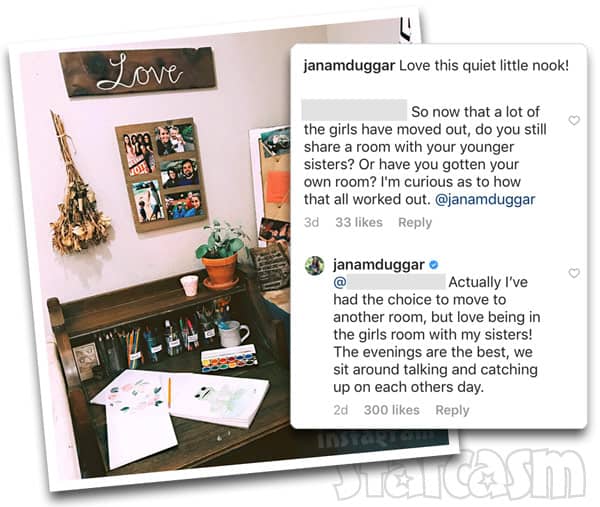 The steady stream of Duggar weddings continue, but the family’s oldest daughter, 29-year-old Jana Duggar, has yet to find her Prince Charming. As a result, she still lives at home where she shares a single bedroom with her four too-young-to-get-married sisters. But, Jana has managed to carve out a little personal space for herself in the form of a “quiet little nook” that features a small desk and, well, not much else.

“Love this quiet little nook!” Jana captioned an Instagram gallery that included photos of her Duggar hideaway. One commenter was curious about Jana’s current living situation. “So now that a lot of the girls have moved out, do you still share a room with your younger sisters? Or have you gotten your own room?” the commenter asked. “I’m curious as to how that all worked out.”

“Actually I’ve had the choice to move to another room,” Jana reveals, “but love being in the girls room with my sisters! The evenings are the best, we sit around talking and catching up on each others day.”

Jana’s comment sparked the curiosity of the diligent Duggarologists on the Duggar Family News Facebook page, who are well aware of the layout of the Duggar compound. An excerpt from the admin’s post about Jana’s nook:

She says she had a choice to stay or sleep in another room but I don’t know what room that would be. That house has only four bedrooms. It has the boys’ dorm, the girls’ dorm, the master bedroom with the literal master sleeping there, and the guest room behind the laundromat where grandparents and temporarily homeless families have stayed. There are a couple of large closets with no windows that may have been one of her choices but I figure she remains in the dorm with the girls and latest home tutor out of no choice of her own. At least she’s allowed to have a nook and a work shed outside.

It is clarified in the comments section that the guest room is currently being occupied by Michelle duggar’s sister, but perhaps Jana was offered that room prior to her aunt moving in?

In addition to wondering which other room Jana was referencing, there was also some speculation about where her nook might be located. Did I mention these Duggarologists are diligent? Here’s the actual floor plan for the upstairs: 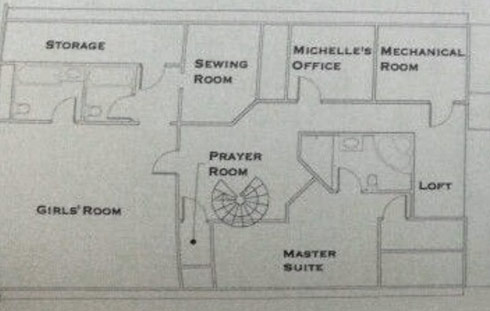 It appears there are a number of places for Jana’s nook, including the sewing room, the loft, , or perhaps the storage room.

Meanwhile, back on Instagram, Jana’s followers were also surprised to find out that she is an artist — as evidenced by the art supplies and the frog painting on her desk. One follower joked about the frog turning into a prince, and Jana replied with a laugh and an explanation for the actual inspiration for the piece: “Haha ? No. My little nephew Marcus loves frogs and asked me to paint it.”

Jana’s sister-in-law Anna Duggar chimed in with her critique: “Love the frog! ???”

Fans will get to see more of Jana, her four little roommates, and most of the rest of the Duggar clan when Counting On Season 4 premieres on Monday, February 11 at 9/8c on TLC!

Advertisers are bailing on Jill & Jessa: Counting On in droves