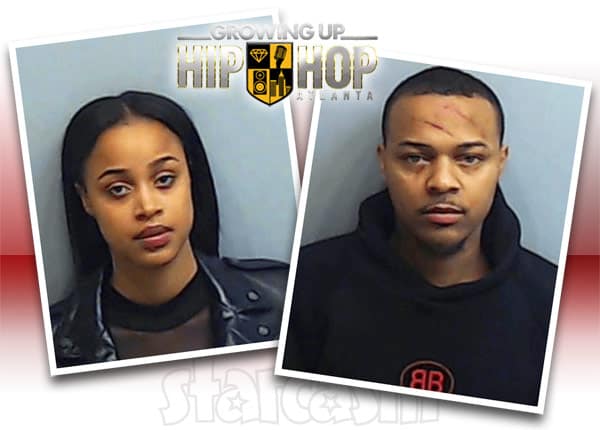 Growing Up Hip Hop: Atlanta couple Bow Wow (real name Shad Moss) and Kiyomi Leslie (real name Lesie Holden) were both arrested and charged with battery Saturday morning after an alleged altercation at an Atlanta condo. When police arrived on the scene, both Bow Wow and Kiyomi indicated that they had been hit by the other party. Police observed “minor visible injuries” to both, and were unable to determine who was the primary aggressor resulting in both of them being arrested.

Bow Wow’s rep has since issued a rather disturbing statement that describes Kiyomi as an “out of control intoxicated female” who “beat him with a lamp, bit him on his side, and spit on him while Bow Wow continually made efforts to avoid her.” The couple’s mug shots photos from their arrests certainly seem to back up the narrative told by Bow Wow’s rep, as you can clearly see some very serious injuries to Bow Wow’s face.

In addition to the booking photo evidence, the rep mentions that there are “two independent witnesses” who back up Bow Wow’s side of the story “indicating that Ms. Holden was simply out of control and was without a doubt the primary aggressor.”

So far there has been no official statement from Kiyomi or her rep.

Both Bow Wow and Kiyomi have since been released from the Fulton County Jail after posting their $8,000 bonds.

Here is the full statement from Bow Wow’s rep:

Shad Bow Wow Moss was wrongfully arrested earlier this morning for the first time after being beaten by an out of control intoxicated female, Ms. Leslie Holden, in an Atlanta condominium. The only two independent witnesses both corroborated his version of events indicating that Ms. Holden was simply out of control and was without a doubt the primary aggressor. For no logical reason officers arrested both parties despite having clear-cut evidence that Bow Wow was the victim in the case. Ms. Holden beat him with a lamp, bit him on his side, and spit on him while Bow Wow continually made efforts to avoid her. Bow Wow suffered multiple injuries, some of which are visible in his mugshot. Ms. Holden’s mugshot on the other hand speaks for itself, despite her allegation to police that she broke a fingernail.

Bow Wow and Kiyomi have had a tumultuous on-again, off-again relationship documented on WE tv’s reality show Growing Up Hip Hop: Atlanta. It was believed that the couple was not together at the time of the altercation, but they were reportedly seeing each other again on the down low.

Here’s a video clip of Bow Wow “calling it quits” with Kiyomi followed by another clip of Kiyomi complaining about how Bow Wow acts when he has had too much to drink: