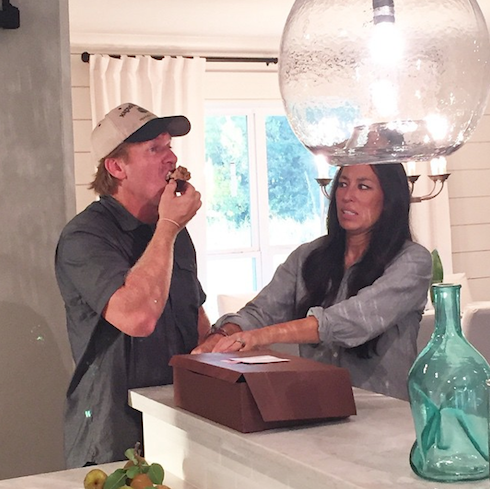 Just when we thought Season Three couldn’t get any bigger…Joanna Gaines goes and drops a major hint about a Fixer Upper hotel! Nothing has been confirmed–at least, not publicly–but Joanna is an active Twitterer and Instagrammer, and has been known to use the social media platforms to preview Fixer Upper developments before they’re actually announced. (Devoteés will recall that Joanna gave the world a hint about the premiere date for Fixer Upper Season Three before the official announcement came via HGTV.)

So–while there’s no specific information just yet, check out the wink Joanna gave us all on Instagram yesterday:

The possibility of a Fixer Upper hotel becomes even stronger when you consider that the Magnolia Market ran a road trip-based promotion all summer long–and it was a rousing success. The #milestomagnolia campaign urged Fixer Upper fans from all over America–and, indeed, all over North America–to visit the Waco market and share the number of miles they traveled to get there via a rustic chalkboard. Photos of the chalkboard could then be entered in the monthly #milestomagnolia contest, which involved prizes from the market. Judging by the overwhelming number of entries (and miles), a Fixer Upper hotel would be a welcome respite for many a weary, traveling fan:

A wknd in Dallas from NM wouldn’t be complete w/o a trip to @magnoliamarket 667 #milestomagnolia. Brought new fans 2! pic.twitter.com/19UmxO9r1s — Tina Armijo (@tmarmijo) September 19, 2015

Have you traveled from Orenco (Beaverton) Oregon to Waco, Texas? We have! #milestomagnolia 2500 one way!! 😀 pic.twitter.com/UPlGGv5YjR — Jamie Gibb (@gibblesnbits) August 27, 2015

It’s been one heck of a busy summer for the good people of Fixer Upper–the silo renovation project, a centerpiece of both Magnolia Homes and the upcoming third season of the show, has been ongoing; Joanna Gaines announced her own line of custom furniture, which will debut this fall; Chipper Gaines lost a bet with his social media-savvy wife, and had to get an Instagram account as a result; and the elusive air date for Fixer Upper Season Three was confirmed. Now, on top of all that, it looks like there’s going to be a Fixer Upper hotel? The Gainses will be running their own network before long 😉