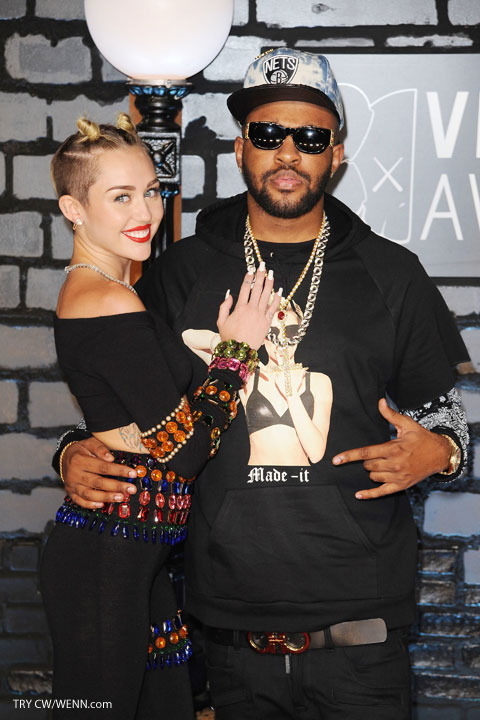 After news hit that Miley Cyrus and her longtime boyfriend and former fiance Liam Hemsworth have finally called it quits for good, she’s been linked to Mike WiLL Made it, the producer of her new alum Bangerz (click here to see all of her album covers, including a topless one.) Who is this guy? Is he really Miley’s new boyfriend?

The producer, who’s real name is Michael Len Williams II, is only 24 but he’s already worked with some of the best singers and rappers in the business. Some of the tracks he’s produced besides the ones he worked on for Bangerz (“We Can’t Stop”) include “No Lie” by 2 Chainz, “Bandz A Make Her Dance” by Juicy J, “Pour It Up” by Rihanna, “Love Me” by Lil Wayne, and “Body Party” by Ciara. Gucci Mane was the first artist to work with Mike in 2011. Along with working extensively with 2 Chainz, he’s worked with rappers Future, Waka Flocka Flame, and Rocko.

Mike grew up in Marietta, Georgia, where he was surrounded by musical family members. As a young teen he developed his record producing talent by playing instrumentals for his friends to freestyle rap on top of. By 14 he was making his own beats on a Korg ES1 beat machine that his dad got him for Christmas. After graduating from high school he enrolled in Georgia State University but soon dropped out to pursue a career in music.

As for working with Miley, Mike recently spoke out in defense of her to radio station Power 105.1. He says she knows that twerking isn’t her forte. “She’s 20 and she likes having fun. She doesn’t take it as seriously as people think. She’s not like I’m gonna go out here and I’m gonna twerk better than everyone else. She even said she knows she’s a singer not a twerker. That’s her real talent. She has huge records on the way. Her vocals are crazy on that record and her album is crazy.” He added at the end of the interview “Shout out to Ciara, she’s real talented.”

As for if he’s really dating Miley, a source told Star magazine: “Everyone knows they’re hooking up.” Take that as you will. Mike was Miley’s date to the VMAs, and photographer Terry Richardson posted up some photos on his Tumblr of the pair goofing off together during a photoshoot.