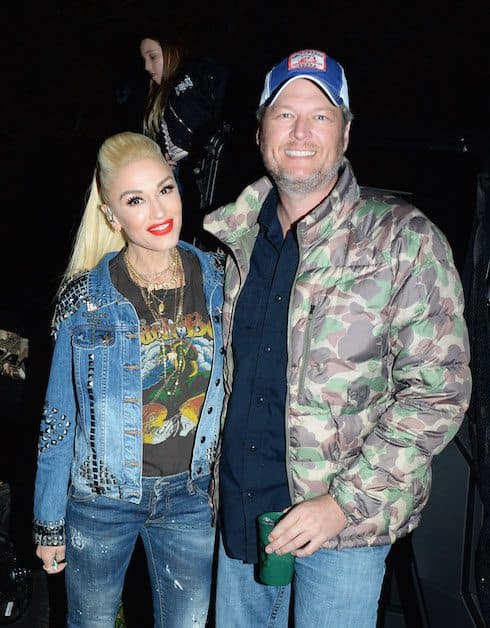 There’s always a ton of gossip about Gwen Stefani and Blake Shelton to sort through, almost all of it related to their alleged surprise pregnancies or top-secret marriages. The latest on both fronts is more of the same, though the baby gossip has a bit of a (believable?) twist. And the couple’s most recent rumored secret wedding sounds like it might have been pretty fun, had it existed.

We begin this Gwen and Blake gossip roundup with a report that they may be going the Kim and Kanye route for the baby they supposedly want together. The surrogacy angle has been building in the tabloids for awhile now: Gwen and Blake’s alleged thoughts on having a surrogate (or adopting) emerged this past spring. Before that, it was miracle babies flying out of the tabloid pages, so this new storyline is a welcome change.

Per Us Weekly the Gwen and Blake gossip is still that the two are “determined to have a child together” — so determined that they’re down to the finalists for their surrogate. From the article:

“They are in the final stages of choosing the woman who will carry their baby. It’s extremely important to Gwen that she give Blake a biological child, and Blake is so excited,” the insider explains, noting that even though Shelton is grateful for Stefani’s sons, “he wants his own child too.”…“Gwen just is so in awe of the love Blake has, not only for her but for the boys.”

One thing it’s interesting to note is that these stories pretty much always come from Gwen’s perspective. Not that she’s the anonymous insider — just that it’s “extremely important to Gwen” that any child she have with Blake be biological. This is always the case: the notion is that Gwen (who turned 49 this year) is the one making this decision, while Blake sips sponsored vodka in his man cave. It at least seems possible that if Gwen really is “so in awe” of Blake’s love for her and her children by Gavin Rossdale, she would want a child with him by any means necessary. I wouldn’t be surprised if we see a ton more stories emphasizing adoption, rather than surrogacy, throughout 2019.

The other big bit of Gwen and Blake gossip has already been debunked by the venerable Gossip Cop, but, as it’s pretty silly, it’s still worth repeating. (Plus, elements from this story are sure to be recycled in the secret marriage articles of the future.)

According to a story that originally ran in The Globe, Blake “gave in” to Gwen and the two eloped in Reno shortly before Halloween. Gwen had been “really adamant” that the two of them get married — the best quote in the whole article is that Gwen, channeling her best Rat Pack impression, supposedly told Blake “It’s now or never, baby.” So they simply “snatched up a marriage license and got hitched by a preacher in the privacy of their hotel room.” Because when you think pseudo-romantic quickie marriage, what’s the first place to come to mind? That’s right: a chapel on the Las Vegas strip with an Elvis impersonator as the officiant and his Bettie Page sidekick standing by as witness. But what’s the second place to come to mind? A Reno hotel room reeking of the lemon disinfectant the cleaning lady just finished putting to good use.

Predictably, no one close to or in the employ of either Gwen or Blake would confirm a word of that. By our count, it’s the third fake engagement and / or wedding story involving these two over the past year. Last November, the fun rumor was that Gwen would propose to Blake at the end of her Christmas special. A few months later, it was that they were ready and willing to get hitched, except that Gwen needed Blake to convert to Catholicism first.

Just a couple of days ago, Gwen went on The Ellen Show and was asked about her relationship status. She claimed Blake is “my boyfriend still,” to which Ellen called BS:

These two seem as good as married. They’re clearly comfortable together — not just emotionally, but in the celebrity-specific manner that suggests their bank accounts and levels of fame are close enough to be compatible. Assuming they ever do have a formal wedding ceremony, it’ll probably be the kind of publicist-arranged event that we all hear about for months in advance. Nothing with Blake Shelton in it can really be compared to a Royal Wedding, but this seems like it’d be close.

Kardashians, Jenners wrapped up in feuds with Caitlyn Jenner