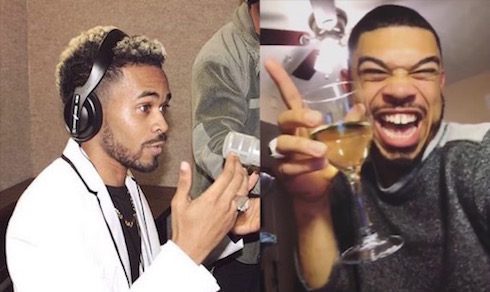 If you don’t know who Prince Carter is, you may have missed our story on him from a few weeks ago. Numerous outlets — us included — reported that Prince, who billed himself as a “Celebrity Media Personality,” and Zachary Jones, a model, had been cast for Love & Hip Hop Atlanta Season 8 and were going to be the first gay male couple in the history of the show. (That’s Prince Carter on the left in the photo above, and Zachary Jones on the right.)

Filming for the new season is getting underway, and our sources couldn’t confirm that either Prince or Zachary were going to be on the show. However, it’s not unusual for new cast members to surface only after production has officially begun.

But now it looks like the entire story may have been a lie. Yesterday, Zachary (who, unlike Prince, had yet to share any updates about his LHHATL involvement on social media) finally broke his silence — and accused Prince Carter of fraud.

Specifically, Zachary claimed that Prince had lied about his connections to gain Zachary’s trust, then fabricated the story about the two of them going on Love & Hip Hop Atlanta in order to gain social media influence. Zachary further claimed that Prince had invented the identity of “Danielle Robinson” in order to pose as his own PR agent. One further implication in Zachary’s update was that he and Prince had never been a couple in the first place.

And Zachary brought plenty of receipts. We’ll begin with the since-deleted screenshots he shared on Instagram. The first four of them all shared the same caption, which we’ve quoted below the initial image: 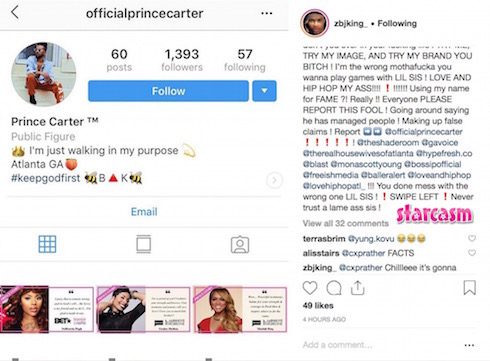 PSA ! PUBLIC SERVICE ANNOUNCEMENT!! !!!!!!!!!! Usually I don’t do stuff like this but ENOUGH IS ENOUGH ! @officialprincecarter is a MOTHAF*CKIN FRAUD ! Report this little son of a bitch! Like don’t you ever in your f*cking life ! TRY ME, TRY MY IMAGE, AND TRY MY BRAND YOU BITCH ! I’m the wrong mothaf*cka you wanna play games with LIL SIS ! LOVE AND HIP HOP MY ASS!!!! !!!!!! Using my name for FAME ?! Really !! Everyone PLEASE REPORT THIS FOOL ! Going around saying he has managed people ! Making up false claims! Report @officialprincecarter

Zachary then shared a screengrab of Danielle Robinson’s Instagram account, which shows only three posts — a surprisingly low number for an alleged media professional: 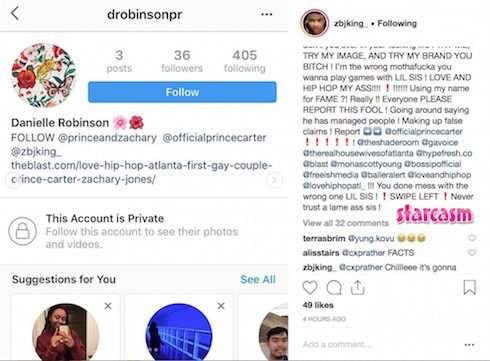 The next two images are of an exchange between Zachary and an unnamed artist who Prince Carter told Zachary he’d managed for six months. Zachary reached out because he himself was looking for a manager. So this is seemingly when Prince’s story began to unravel: 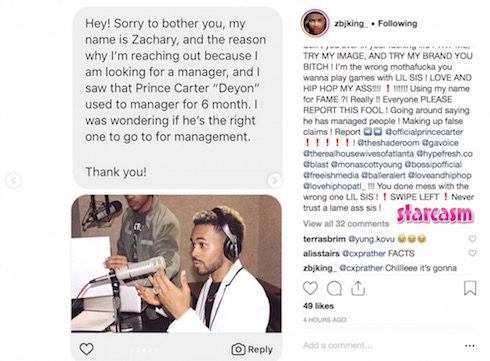 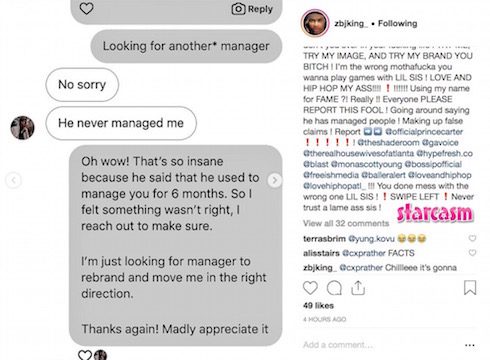 Next is what looks like part of an exchange between Prince Carter and Zachary Jones, in which Prince claims he’d managed the unnamed artist above: 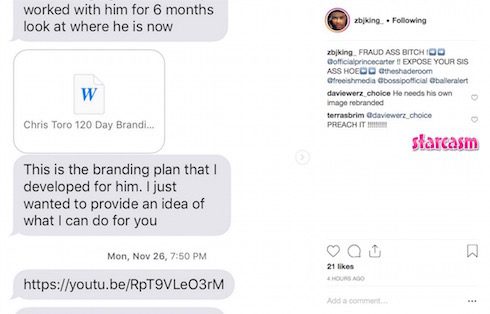 By this point in the day, both Prince Carter and “Danielle Robinson” blocked Zachary, and he started dropping the f-word (“fraud,” but the other one, too) with more vigor: 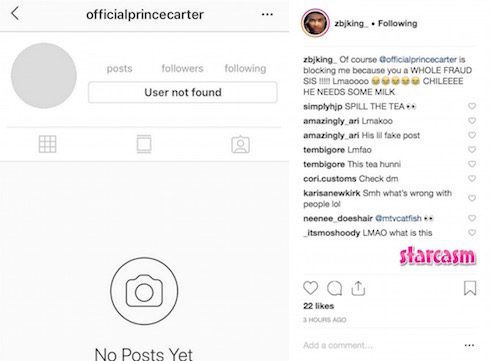 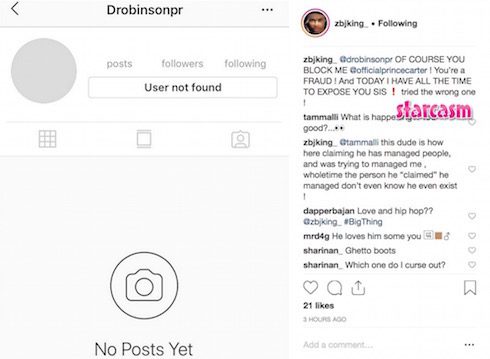 “This is what a fraud looks like,” reads part of Zachary’s caption for the final now-deleted image, a photo of Prince Carter that Prince originally shared on his own Instagram page: 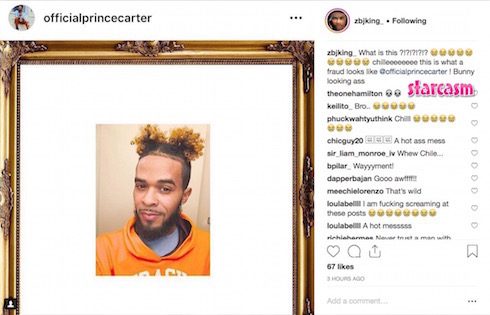 After deleting the above images, Zachary simply continued spilling tea on Instagram stories. Over another image of the conversation about trying to find a manager, Zachary wrote, “Whole time this bunny wanted to managed [sic] me since love and hip hop didn’t work out for me, so he used my name and image for exposure / publicity then wanted to “managed me” like FOH , whole time he’s a fraud.” 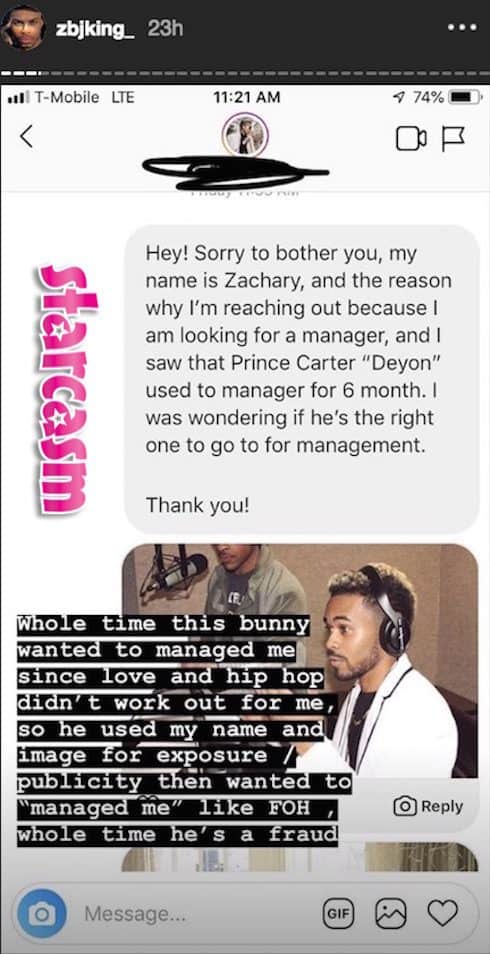 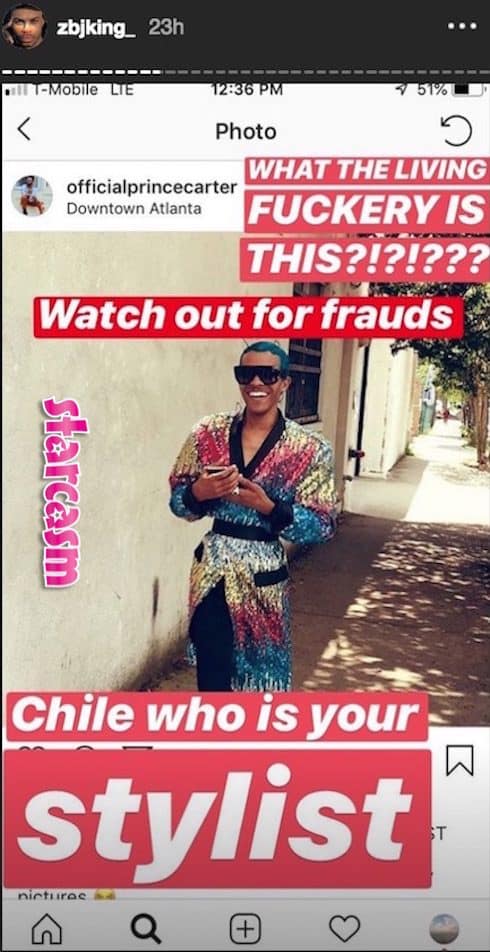 And finally, here’s Zachary accusing Prince of siccing his sister on him in the middle of all the tea spillage: 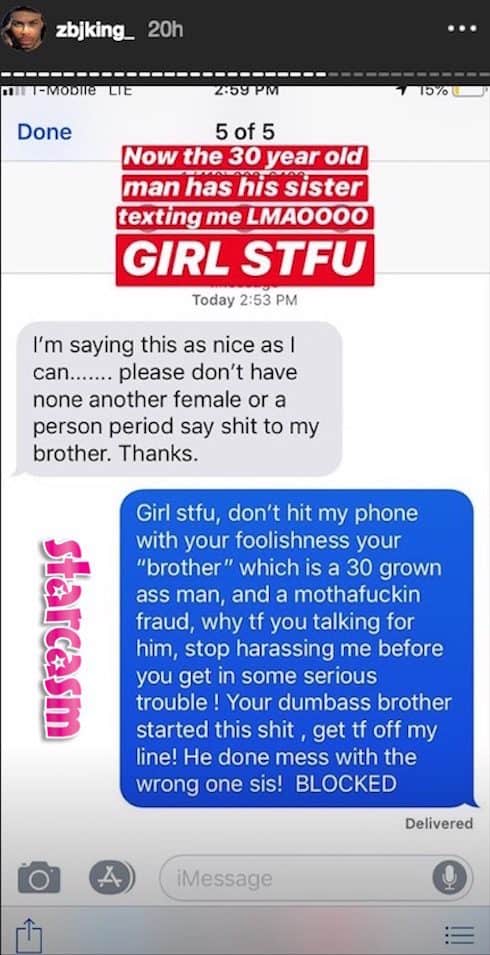 We’re still working on confirming Zachary’s claims, along with figuring out when he was up for the Love & Hip Hop Atlanta cast and whether Prince was ever actually cast for LHHATL Season 8. If he was, though, and any of these allegations turn out to be true, it seems unlikely that Prince will still feature on the show in any capacity.

We’ve reached out to both Prince Carter and Zachary Jones and will update this article if we hear back.