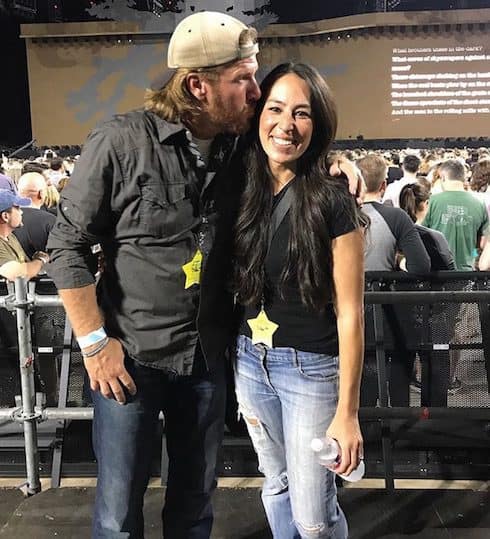 The first couple of HGTV just dropped a huge, genuinely shocking announcement: Joanna Gaines is pregnant with her fifth child! She and Chip shared the news on social media just after last night’s new Fixer Upper‘s new episode — an episode that, coincidentally or not, featured Joanna’s sister Mary Kay moving back to Waco with her husband and their seven children. (It’s worth noting that the Gainses also shared the news well after most media outlets had retired to bed to nurse lingering New Year’s hangovers, meaning the story stayed largely their own for a blissful few hours.)

The two took a page from Nicole Curtis and revealed the news that Joanna Gaines is pregnant with a silly photo and a winking caption. Though Joanna’s the one with the baby bump, hers looks like a mere Thanksgiving blip next to Chip’s exaggerated form:

Gaines party of 7.. (If you’re still confused.. WE ARE PREGNANT) @joannagaines

(One other side note: it’s being said that Chip actually had to go back and add the “If you’re confused…” part of the caption after sharing the original post, because, yes, fans were indeed confused. We haven’t yet been able to verify this, but it wouldn’t be surprising.)

Joanna and Chip will get plenty of help from their first four children when it comes to raising their fifth. In descending order of age, the Gaines’ children are Drake, 12; Ella, 11; Duke, 9; and Emmie, 8. Plus, as we mentioned above, Joanna’a sister Mary Kay is back in town — and she brought plenty of eager helping hands with her 🙂

As astute social media observers have pointed out the couple actually teased the news that Joanna Gaines is pregnant well before actually sharing it. Joanna, 39, urged her fans to “Be expectant” about the new year in an otherwise innocuous Instagram update yesterday afternoon:

New year, new hope… Be expectant. There is just something about fresh faith and unwavering trust that brings life to our souls. May this be your best year yet. #2018

And Chip got in on the fun with a string of Twitter hints that some big news was coming. The first one couldn’t possibly be a bigger wink-wink nudge-nudge — while the third had some fans reaching for their #TMI hashtags:

Everyone tune in now for tonight’s #FixerUpper! We’ve got some BIG news to share.. hint #1 pic.twitter.com/Qwl3ddbbTd

Hint #3 You might recall a few months back.. the ever amazing, ever romantic @JOHNNYSWIM was in Waco. And they put on a little too romantic of a concert.. anyways, one thing led to another, & we are officially pregnant. And I could not be more EXCITED! #5 #7ThePerfectNumber

If what Chip says about the concert is true, then he and Joanna conceived baby #5 on or around October 13, 2017. Given that information — and it really may be too much, sorry — then Joanna is likely due in early to mid-July 2018.

We’ll keep our ears and noses and sixth senses peeled for more news. In the meantime, congratulations to the Gainses on their fifth baby!

Do they put seaweed in your vagina to induce labor?