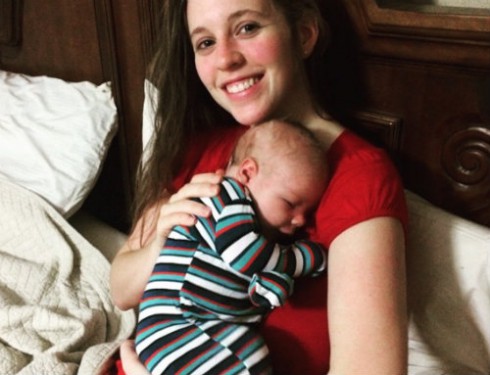 Who is ready to meet Israel Dillard? Tonight’s 19 Kids and Counting is a special 2-hour episode all about mom Jill Dillard’s dramatic delivery on April 6.

“Contractions kicked in very hard, with not a lot of breaks in between,” Jill said of when her water broke in the middle of the night. As per their plan, she labored at home for the next 24 hours before calling her birth team, which included mom Michelle Duggar and sister Jana Duggar. Unfortunately, she didn’t progress much during the following day despite continual contractions. Jill later explained, “At this point, we felt like it would be a good time while I’m not in an emergency situation to get to the hospital.”

As Jill later explained, she had to have an emergency c-section after 70 hours of labor. Even though it wasn’t how she hoped her delivery would go, she said she was happy with the results: “I love our birth story because it bonded us so well.”

Now that Baby Dilly is nearly one month old, Jill said many things about motherhood have surprised her — even though she had a lot of experience with her younger siblings and tried to glean knowledge from mom Michelle Duggar.

“I have just asked my mom a lot of questions about what is normal and what to expect,” Jill told People. “I call out to my mom and ask things like, ‘Is this feeling normal?’ and, ‘How long should I nurse?’ Israel’s a little boy, he will eat all the time, so I was asking if 20 minutes a feeding was long enough or too much, and how all of it should go.”

Fortunately, she’s getting a lot of assistance from husband Derick Dillard.

“He is doing an amazing job helping out with nighttime diaper changes,” she said. “I’ll start nursing and when I’m done, he’ll take the baby and change his diaper and put him to bed. That is his little routine.”

Israel’s also helped out by being a pretty easy baby.

“During the night, he’s done pretty good,” Jill explained. “He actually slept for a seven-hour stretch, he’s done that a couple of times. You never know. I’m not counting on it.”

Elsewhere in the Duggar-verse, Josh Duggar rallied outside the Supreme Court last week while the justices heard arguments for and against gay marriage. As the executive director for the legislative brand of Family Research Council, Josh’s stance isn’t surprising — even if his analogy to Roe vs. Wade was stretching it a bit and some of his points were inaccurate.

“Natural marriage has been clearly defined over the years,” Josh said in an interview with CNS News. “I think we have to be very clear when we look forward in saying as the Court considers this in what the implications are going to be… In 1973, the Court had another decision that they said, ‘We’re going to decide this once and for all.’ In Roe vs. Wade, when that was handed down, it only began the debate [about abortion].”

Meanwhile, Josh’s parents tackled that second issue while speaking at a pregnancy center in Georgia. Again, their stance as strongly pro-life isn’t surprising. The controversy there was that the pregnancy center compared abortion to the Holocaust in promotional posters — even though that’s something the Duggars have done many times before.

19 Kids and Counting airs on TLC tonight at the special time of 8/7c.

VIDEO Dina Lohan’s writing a book, wants daughter Lindsay (who’s now living with her) to have some babies