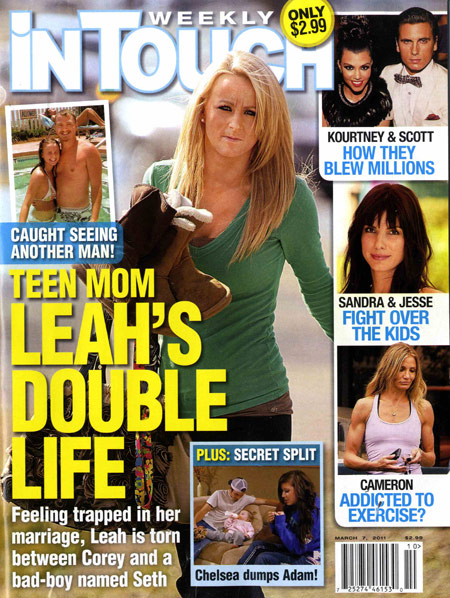 The current issue of In Touch Weekly features a cover story on Teen Mom 2 sweetheart Leah Messer Simms with the sensational headline, “Teen Mom Leah’s Double Life: Feeling trapped in her marriage, Leah is torn between Corey and a bad-boy named Seth.” The cover also features an inset photo of Leah and Seth in a swimming pool with the caption: “Caught seeing another man!”

In Touch has learned that when her husband’s back is turned, Leah has been secretly getting together with her bad-boy ex Seth George — and indulging what a friend of hers calls her “wild streak.”

“She has definitely met up with Seth without telling Corey,” says a friend, who adds that with Seth, Leah “has fun and feels like a teenager again.”

This “friend” goes on to say Leah first hooked up with Seth after rekindling a fling with ex Robbie Kidd while she and Corey were split, which was shortly after giving birth to her twins. Leah reportedly dumped Seth when she decided she wanted to be with Corey, but allegedly that wasn’t the end.

“She was still dating Seth last summer, when she was trying to get back together with Corey,” the friend says, adding that even as she begged him to give her another chance, Leah “never told Corey about Seth.”

Now, before all you folks start with all the starcasm “hater” talk let me say that this sounds like a bunch of hooey to me. I’m thinking worst case scenario Leah went on a couple dates with this guy when she and Corey weren’t together and dropped him like a twice-baked potato once she realized Corey (and his majestic camo cap) was Prince Charming incarnate. 🙂 But, I figured some of you Teen Mom fans would see the magazine cover on the newsstands or hear rumors online and I wanted to let you know what the article is based on.

*** Starcasm.net is an official Leah and Corey love zone.