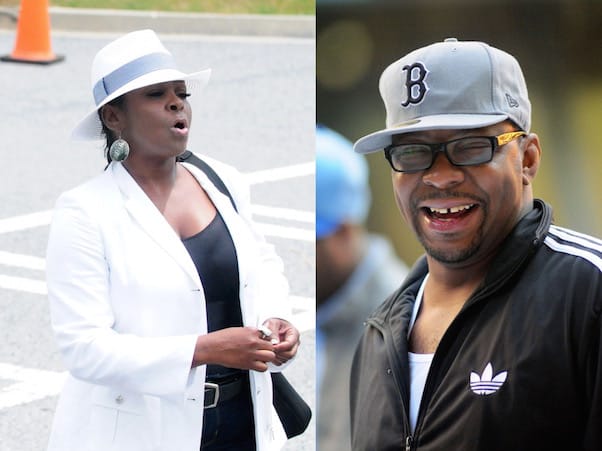 Bobby Brown’s sister Leolah Brown has taken to social media with a claim that, if true, is both strange and disturbing: her brother was the victim of a horrible hit-and-run that left the singer with “broken bones” and “legs [all] messed up.” But Leolah didn’t offer any evidence to support her claims — so did Bobby Brown get hit by a car for real? And, if not, what was his sister talking about when she shared her all-caps tale?

Leolah was most recently in headlines for her role in a cross-church shouting match during her niece Bobbi Kristina Brown’s funeral back in August of 2015. According to multiple witnesses, Leolah couldn’t contain herself when Pat Houston arose to speak, and called out “Whitney is rolling over in her grave! You are so wrong for this, Pat!” And, in the months before Bobbi Kristina passed, Leolah often made her distaste for the Houston side of the family known, saying they “wanted Bobbi Kristina to die” and alleging several Houstons — Pat among them — were responsible for Bobbi Kristina’s overdose and eventual death.

All of which is to say that you should possibly take the following with a grain of salt. Three hours ago, Leolah posted on her public Facebook page that Bobby Brown “got hit by a SPEEDING car WHILE WALKING!” Leolah further wrote that the “car CAME STRAIGHT FOR [Bobby] & TRIED TO DAM KILL HIM!”

The rest of Leolah’s post — which we’ve screengrabbed and cut-and-pasted below, in case she eventually deletes it — is almost all in caps, and jumps quickly from the scene of the crash to what sounds like a disguised diatribe against someone or something much more specific.

Leolah also tagged three family members in her post: Tina Brown, Chris Brown, and Karriema Muhammad. However, as of this writing, none of the three had shared anything about a Bobby Brown car accident to any of their publicly available social media pages.

Here’s Leolah’s post, followed by the transcript. Did Bobby Brown get hit by a car? Based on Leolah’s words, we hope not: 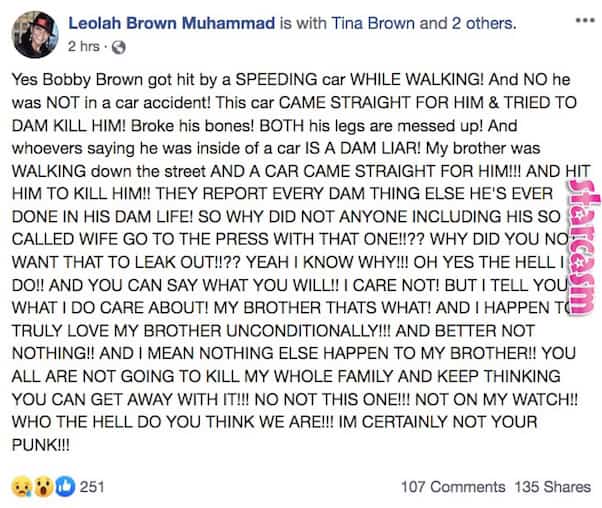 Yes Bobby Brown got hit by a SPEEDING car WHILE WALKING! And NO he was NOT in a car accident! This car CAME STRAIGHT FOR HIM & TRIED TO DAM KILL HIM! Broke his bones! BOTH his legs are messed up! And whoevers saying he was inside of a car IS A DAM LIAR! My brother was WALKING down the street AND A CAR CAME STRAIGHT FOR HIM!!! AND HIT HIM TO KILL HIM!! THEY REPORT EVERY DAM THING ELSE HE’S EVER DONE IN HIS DAM LIFE! SO WHY DID NOT ANYONE INCLUDING HIS SO CALLED WIFE GO TO THE PRESS WITH THAT ONE!!?? WHY DID YOU NOT WANT THAT TO LEAK OUT!!?? YEAH I KNOW WHY!!! OH YES THE HELL I DO!! AND YOU CAN SAY WHAT YOU WILL!! I CARE NOT! BUT I TELL YOU WHAT I DO CARE ABOUT! MY BROTHER THATS WHAT! AND I HAPPEN TO TRULY LOVE MY BROTHER UNCONDITIONALLY!!! AND BETTER NOT NOTHING!! AND I MEAN NOTHING ELSE HAPPEN TO MY BROTHER!! YOU ALL ARE NOT GOING TO KILL MY WHOLE FAMILY AND KEEP THINKING YOU CAN GET AWAY WITH IT!!! NO NOT THIS ONE!!! NOT ON MY WATCH!! WHO THE HELL DO YOU THINK WE ARE!!! IM CERTAINLY NOT YOUR PUNK!!!

We’ll add two more items of note. One is that no news sites or gossip blogs are reporting on anything to do with this alleged car accident. And no photos or videos of the accident or aftermath have yet emerged.

Additionally, Leolah did something that may or may not be curious after sharing the above news: she shared a string of memes, news stories, and videos, all of which were seemingly unrelated to Bobby Brown and a potential car accident. In the two hours between Leolah’s initial post and her re-posting (just over an hour ago as of this writing), Leolah also made nine posts on topics as diverse as divers searching for slave shipwrecks via National Geographic; an alert on a suspected human trafficker; and a missing eight-year-old boy in Newark. Presumably Leolah could have done all of that from a hospital waiting room, trying to distract herself while praying for her brother. But, again, Leolah never mentions a hospital, or an ambulance, or anything medical.

We reached out to Leolah and have yet to hear back; we’ll update the post when and if we do.

UPDATE August 26 12:14 PM: We still haven’t heard back from Leolah Brown, but Bobby Brown’s attorney Christopher Brown has shut down Leolah’s claims. Christopher gave a statement to The Blast denying that any of what Leolah said actually happened. Here’s his full statement on the Bobby Brown car crash story / hoax / mystery (take your pick, at this point):

There are reports circulating that Bobby Brown was hit by a car over the weekend and substantially injured both his legs. The reports are false and Bobby Brown was in Los Angeles enjoying time with his family this weekend.

Mr. Brown was not struck by a vehicle over the weekend and statements from Leolah Brown to the contrary are fake news.

RBRM (Ronnie, Bobby, Ricky & Mike) are preparing to tour Japan and Australia in October 2019 and Bobby Brown will be looking to reconnect with his fans in those countries.

(Photo credits: Did Bobby Brown get hit by a car via FameFlynet.uk.com / SplashNews.com)