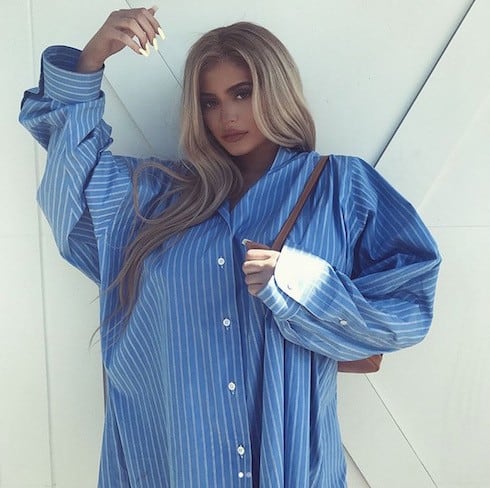 Kylie Jenner is playing a deep marketing game. The 20-year-old is widely believed to be pregnant with her first child, and is reportedly due sometime in February. But, because everything the Kardashians do is a mystery shrouded by rumors and gossip, it’s impossible to know what’s actually true until it happens–and the family has yet to actually, officially confirm Kylie’s pregnancy. Which means, of course, that they can tease out the Kylie Jenner pregnancy rumors indefinitely, to the delight of their millions of followers, in a sort of reverse-trolling. It’s interesting!

Take, for example, one of Kylie’s most recent Snapchat pics, in which she’s lounging poolside at home. Kylie has been, by her standards, absurdly secretive about sharing photos of her body on social media of late (see the photo at the top of this article, which looks more like a kid playing dress-up than anything else, for further proof). And the screengrab below is no exception, but Kylie has added the caption equivalent of a wink and an elbow to the ribs: 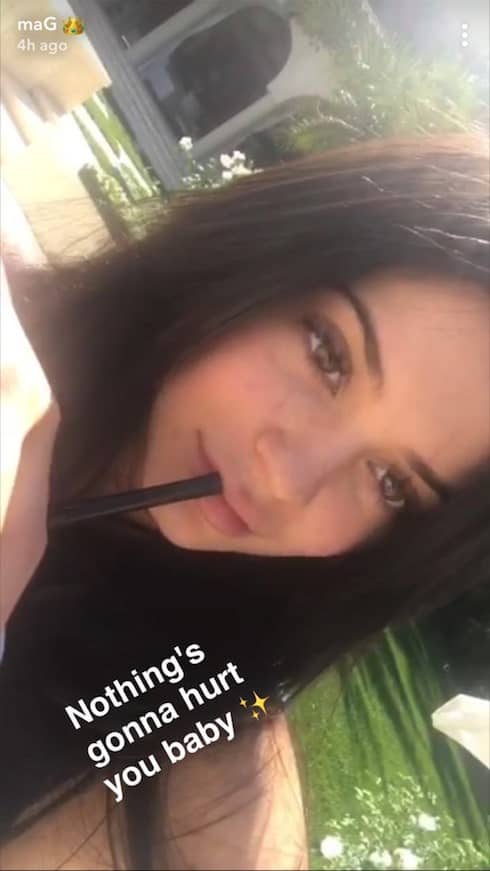 Just two days before the Snapchat share, Kylie kept her pregnancy shrouding at an elite level by sharing a selfie in a parka on Instagram. Astute observers pointed out that Kylie shared the photo as the California wine country wildfires were beginning to burn out of control (though this is hardly the first time one of the Jenner girls could be accused of tone-deaf branding). And it’s further worth mentioning that Kylie’s parka selfie came on a day when it was 83 degrees in her native Calabasas. All that said, a good tease is a good tease, and the cell phone placement is a master stroke. It could even be Kylie’s body double back there:

Finally, as Kardashian home network E! pointed out, Kylie took advantage of alleged baby daddy Travis Scott’s “recent DJ appearance at the Ksubi store in the SoHo area of NYC” to make a quick appearance without ever having to leave home. Kylie FaceTimed with Travis during his paid appearance this past weekend, and reportedly got Travis the biggest applause of the set when he turned the phone around to reveal that it was Kylie on the other end.

As the especially cynical among her followers have also said, Kylie has been linked to reports that she’s considering aborting her still-unconfirmed baby. That might be a bit extreme even for her family, but it does illustrate the public perception that Kylie Jenner is just the latest in a line of publicity-hungry Kardashians, for at least one of whom pregnancy rumors are pretty much a weekly thing at this point. Big sister Khloe Kardashian has begun stepping out publicly and revealing her own baby bump; at some point, Kylie will have to do the same.