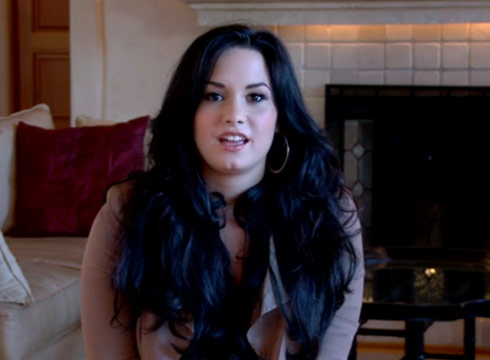 Demi Lovato recently posted a thank you video to her fans via her Facebook page but didn’t address any of the specific issues that led her to rehab.  All of that has changed now that she’s sat down for her first interview post-rehab with Robin Roberts of 20/20.

In a Good Morning America teaser for Friday night’s interview ABC provided a hefty sample of the multiple issues the Disney star opens up about.  Perhaps the most startling of these revelations is the admittance that she’s a cutter.  Lovato told 20/20 that:

“It was a way of expressing my own shame, of myself, on my own body.  I was matching the inside to the outside. And there were some times where my emotions were just so built up, I didn’t know what to do. The only way that I could get instant gratification was through an immediate release on myself.”

The cutting followed her ongoing struggle with eating disorders that she claims was in response to bullying as a young girl.  Lovato said:

“I developed an eating disorder, and that’s kind of what I’ve been dealing with ever since.  I was compulsively overeating when I was eight years old.  So, I guess, for the past 10 years I’ve had a really unhealthy relationship with food.”

The years of keeping secrets in addition to the physical toll of her struggles came to a boiling point during her tour with The Jonas Brothers in support of Camp Rock 2.  This is the point in which Lovato lost it and struck one of her back-up dancers, Alex Welch, during the South American leg of the international tour:

“I was performing concerts on an empty stomach.  I was losing my voice from purging. I was self-medicating. I was not taking medication for depression, and I literally was so emotionally whacked out that I took it out on someone that meant a lot to me.”

She went on to say of the infamous incident with Welch that:

“I take 100 percent, full responsibility.  I feel horrible. She was my friend.”

Following this public outburst her family staged an intervention that led to her well publicized stint in rehab at Timberline Knolls in Illinois.  Lovato said to Roberts that her little sister Madison, an actress on Desperate Housewives, was her guiding light and motivation to speak out.

“The real reason why I’m sitting down with you is to open up the eyes of so many young girls, that it doesn’t have to be this way.”

The interview is slated for Friday night at 10:00 PM EST on ABC.