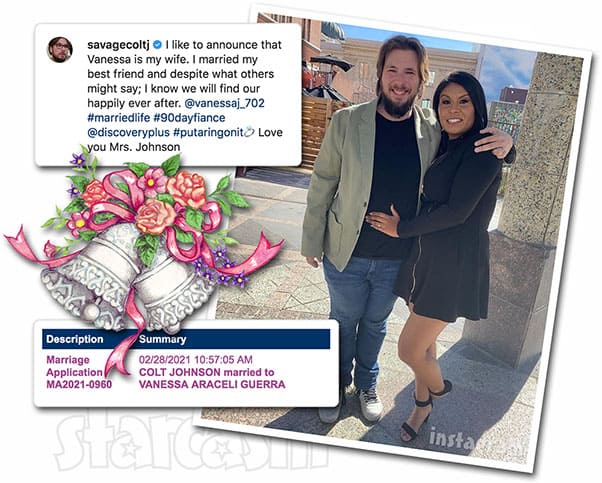 Coltee dropped a BIGGEE surprisee during the second part of the 90 Day: The Single Life Tell All: he and Vanessa are married!

“I love Vanessa so much, I married Vanessa and didn’t tell anybody in this f***ing room,” Colt announced to his co-stars and discovery+ cameras. “Meet wifee Number 2,” he added.

The news came as a HUGE surprise to cast and crew — including Colt’s mom, Debbie. The announcement was also a huge shocker for me because I’ve been checking Las Vegas marriage records every so often all year thinking that Colt and Vanessa might try to make it official on the sly. Nothing ever turned up from any of my searches.

So how did I miss it? Did they actually get married? As it turns out, the wedding was more “on the sly” than I anticipated! Colt reveals that he and Vanessa eloped and the ceremony took place in Reno, Nevada in a chapel by the river. “It was very simple. Very private,” Colt said of the nuptials.

(In case you were curious, the name of the river than runs through Reno is the Truckee River. Well played Colt!)

After the marriage bombshell was dropped, I immediately donned my 90 Daytective gear and virtually headed to the Reno courthouse to verify. Yep, there is a marriage record on file for Colt Johnson and Vanessa Guerra! The entry states: “02/28/2021 10:57:05 AM Colt Johnson married to Vanessa Araceli Guerra.”

The only thing left to say is… Congratulations to Colt and Vanessa! Not only for getting married, but for managing to do it without any members of the dedicated 90 Daytective army finding out!

Colt took to Instagram and shared a couple photos with his new wife taken on the Truckee River Walk in Reno as he proudly boasted about being married:

“I like to announce that Vanessa is my wife,” Colt captioned the images. “I married my best friend and despite what others might say; I know we will find our happily ever after.” He tagged Vanessa’s Instagram account (@vanessaj_702) and added a string of hash tags that included #marriedlife, #90dayfiance and #putaringonit💍. He concluded with: “Love you Mrs. Johnson.”

Vanessa shared a clip from the Tell All in her stories, as well as a screen cap of a news article about the marriage announcement, but that’s all so far from the bride.

Colt’s ex-wife Larissa hasn’t publicly responded to the big news yet. Colt’s other on-screen ex, Jess Caroline, has yet to respond publicly either.