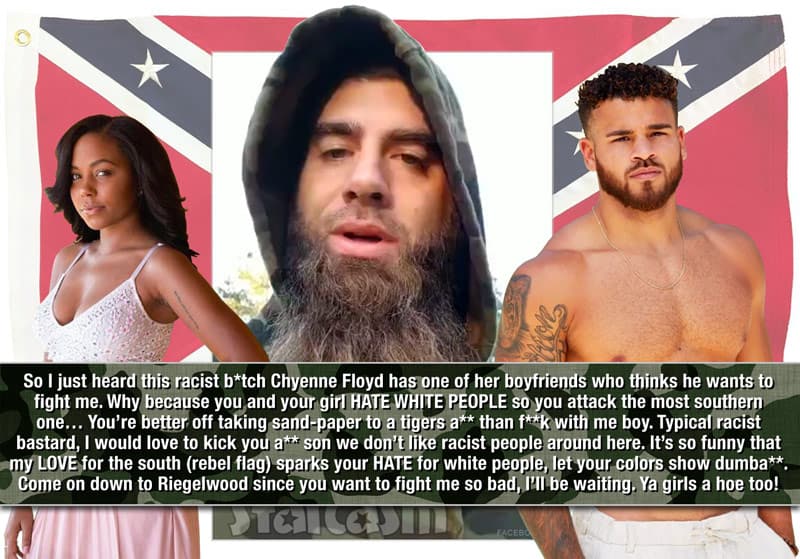 2018 is almost over, but former Teen Mom 2 star David Eason managed to squeeze in just a little more social media drama before the new year as he attacks “racist” Teen Mom OG couple Cheyenne Floyd and Cory Wharton after Cory told TMZ that he wanted to face off against David in the boxing ring — more than a month ago.

“So I just heard this racist b*tch Chyenne [sic] Floyd has one of her boyfriends who thinks he wants to fight me,” David boasted on Facebook earlier today. “Why because you and your girl HATE WHITE PEOPLE so you attack the most southern one…” David continued, before flexin’ with some serious talkin’ words: “You’re better off taking sand-paper to a tigers a** than f**k with me boy.”

David then continued his noble crusade against racism: “Typical racist bastard, I would love to kick you a** son we don’t like racist people around here. It’s so funny that my LOVE for the south (rebel flag) sparks your HATE for white people, let your colors show dumba**. Come on down to Riegelwood since you want to fight me so bad, I’ll be waiting.”

In case you missed it, David’s delayed response is mostly in reference to a paparazzo interview with Cory regarding the proposed celebrity boxing match between Farrah Abraham and Kail Lowry. After Cory voiced his support for Kail, he changed the subject by revealing who he wanted to box. “Talking about boxing matches… David, Jenelle’s husband, that’s who I want. Set it up, man! Tell him to wear that Confederate flag on his back when he comes to the ring because it’s game time, baby, you know what I’m sayin’?” The Confederate flag Cory is referring to is the one from David’s now-infamous photo in which he has it draped over his head and shoulders as he strikes a heavy metal thrasher pose while hanging out in Jenelle’s she shed.

Cory is asked if there was anything specific that David said or did to make him want to get in a boxing ring with him, and Cory responded: “Yeah, yeah. He came at my baby mama a couple times on Twitter. So, if he wants to be brave on Twitter, let’s handle it, you know what I mean? Let’s set it up. It will be professional.”

When Cory mentioned that David had come after Cheyenne on Twitter, he actually meant Facebook. After it was announced that Cory and Cheyenne were joining the cast of Teen Mom OG, David posted about tweets that Cheyenne had made that were very derogatory towards white people — which is why David refers to her as racist. Here is an excerpt from our article about David’s commentary on Cheyenne being cast on Teen Mom OG:

“I’m sickened to hear that Cheyenne Floyd said she hates white people and wants to kill them all!” David wrote, referencing some controversial tweets made by Cheyenne (examples below). “WELL HOLY SH!T I’m the bad guy even though I never said I hated anyone or wanted to kill them. Yet I received death threats from you morons?”

In case you missed it, Cheyenne came under fire for Twitter activity that included a tweet about watching the movie The Help as well as a grimace-inducing retweet. “My mom said I can’t see The Help, she knows I already have a problem with white people,” Cheyenne tweeted in September of 2011. Her mom’s decree didn’t stop Cheyenne from watching the film, however. “Last night I saw it and I wanted to kill every white person I saw,” Cheyenne tweeted, adding three gun emoji.

A couple months later, Cheyenne retweeted this statement from a fan: “@CheynotShy and @originallyD are the only nazi-loving, black power-having, ‘kill-a-white-baby-if-I-could’ people I can accept and adore.”

Jenelle also expressed her anger over Cheyenne’s casting after David was fired for his homophobic and transphobic comments. She even revealed that David wanted to apologize for his comments (which he has previously stated he would never do), but MTV refused to meet with him:

When my husband wanted to apologize we had our Morgan telling us “Its too late. You can’t do anything to reverse this.” We setup meetings in NYC and they didn’t want to hear my husband. Yet you go and hire someone that doesn’t like whites and she can say sorry?!! ? https://t.co/ca4PkpAbEL

Getting back to David’s comments from earlier today, he signed off with some uppercut for Cheyenne: “Ya girls a hoe too!”

I think it’s totally ridiculous to judge people based on how many people they’ve had sex with, but since David is such the Southern gentleman who has those old school values, I feel I should share a few facts:

Cheyenne is 26 and Cory is 27. They both have just one child, their daughter Ryder. Cheyenne did have a boyfriend that didn’t work out on the show this season, but I don’t get the impression that she dates a lot of men. (Not that I think it matters, as long as she is protective of who all is involved in Ryder’s life.) Cheyenne and her boyfriend’s relationship ended without anyone being arrested and without so much as a protective order being filed.

Jenelle is 27 and David is 30. They have five children combined, none of which have the same set of parents. I won’t even start with their arrest histories.

So far, neither Cheyenne nor Cory have responded to David’s comments. Facebook did, however, as they removed David’s post.

Meanwhile, David returned to offering up his take on homosexuality with one of those insightful-less memes about how awesome men used to be back before color television: 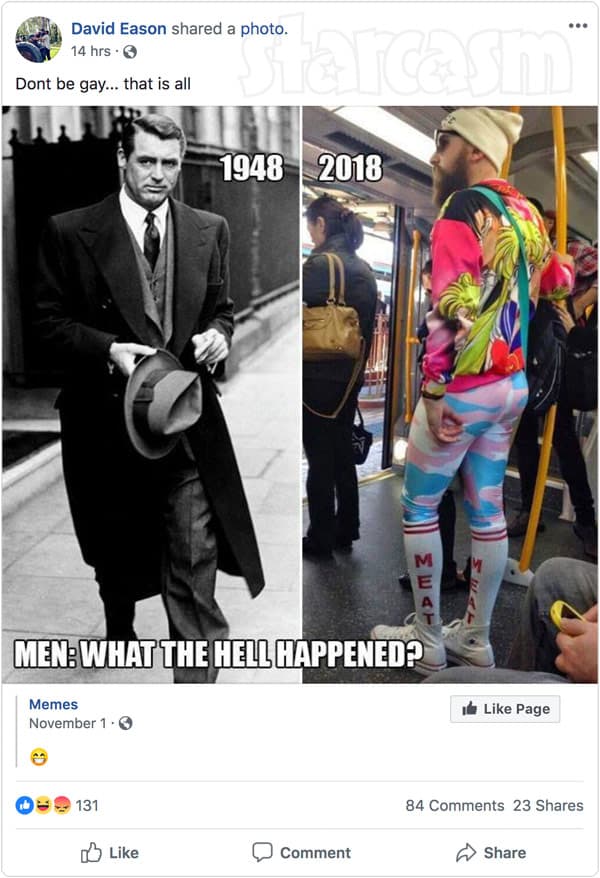 David maintained the elevated discourse in the comments section with more of his trademark “talking words” explaining how he doesn’t hate anybody, it’s just that being gay is wrong and should be made fun of:

COMMENT: My uncle seemed like he really hated gay people also….. made a point of hating them…. he turned out gay! Weird huh? It’s called thou does protest to much David and you do it all the time!

DAVID: Ive never said I hated anyone Emily. And I don’t, they are just easy to make fun of ?

David later defended his post by pointing out: “It’s just a joke, you look gay if you’re wearing this no matter if you are or not.” He also calls someone a “lost soul” for suggesting that homosexuality is OK before adding: “The Bible also says be careful of the company you keep.” That seems like sage advice, when applied properly.

Just for fun, and without much of a specific agenda, I decided to create my own meaningless meme by using the same black and white photo of a handsome well dressed man that looks like Gregory Peck: 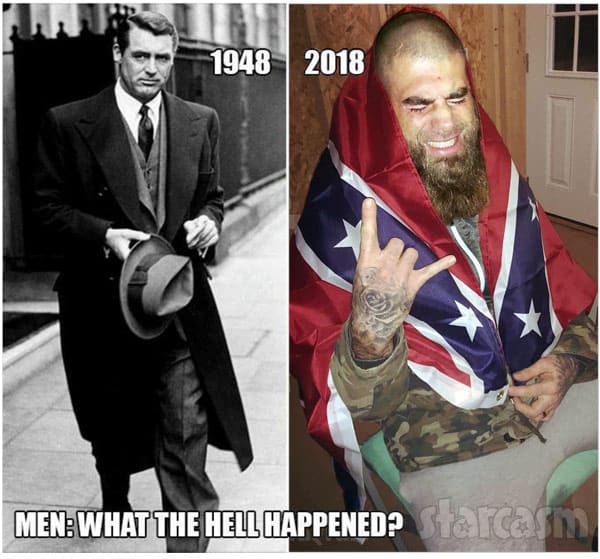 Don’t be David… that is all.