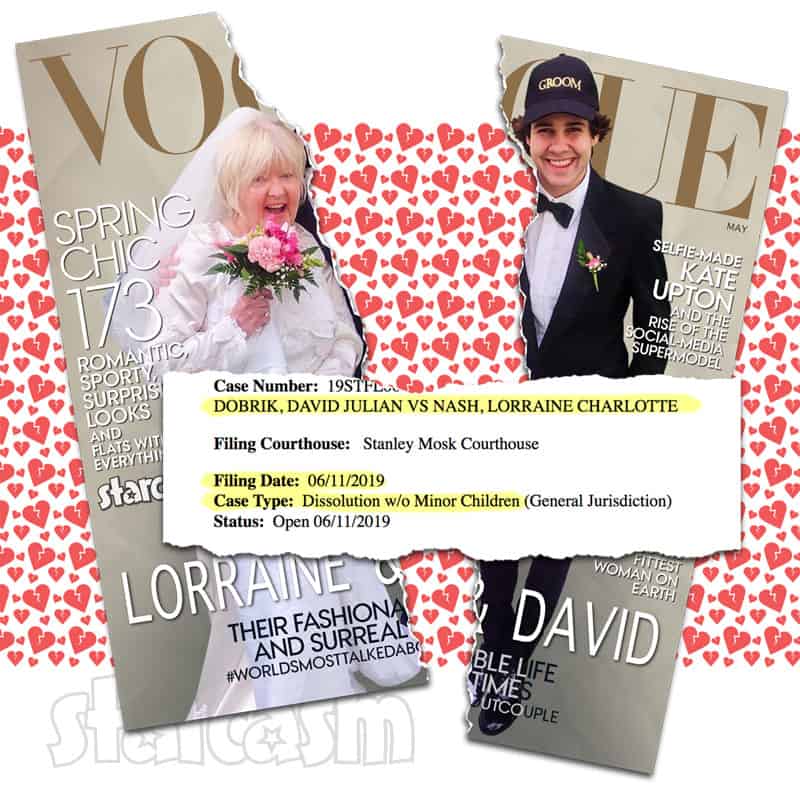 According to Los Angeles County court records, the 22-year-old Dobrik has filed for divorce from his bride Lorraine Nash after less than a month of marital bliss. David filed the divorce paperwork on Tuesday, June 11 at the Stanley Mosk Courthouse.

If, for some reason, you have read this far and have no earthly idea who David Dobrik and Lorraine Nash are, let me provide a little context. David Dobrik is a notorious smile-inducing prankster, and he played the penultimate prank on his 45-year-old Youtube bestie Jason Nash last month when he flew Jason’s mother Lorraine to Las Vegas and the two got married! That made David the stepdad of Jason, and also made for a month’s worth of hilarious jokes — all of which Jason embraced in good spirits. (Jason still has his name as Jason Dobrik on Twitter.)

Although we do not know the specific reason cited for the divorce, the case type is listed as “Dissolution without Minor Children.” So, I assume that means that David didn’t take his prank one step further by adopting a little brother or sister for Jason Nash. Of course, the specification of there being no minor children does leave the door open for the possibility that David could have (for example) adopted Trisha Paytas so she would be Jason’s sister.

The fact that the filing is a dissolution of marriage would seem to indicate that David and Lorraine are not seeking an annulment.

I did want to point out that Jason still has the chance of getting the last laugh if David didn’t sign a prenup. I think Lorraine deserves it for the hardships this marriage has caused her over the weeks, right? 😉

The Blast was the first to report on the divorce.

MORE ON THIS TOPIC