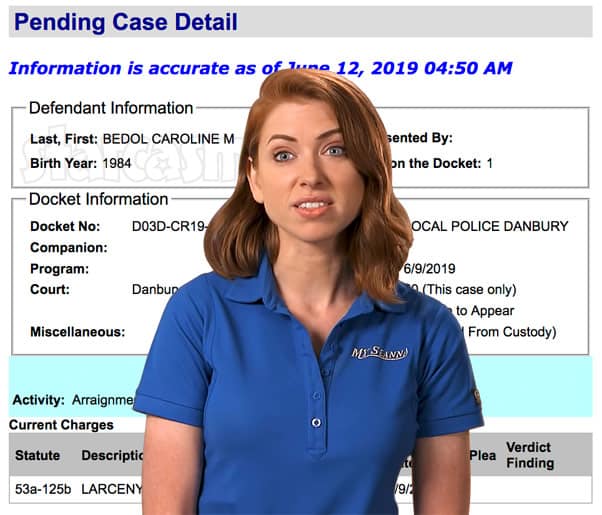 Former Below Deck third stew Caroline Bedol’s troubles continue as she was arrested over the weekend in Connecticut and charged with larceny.

According to court records, Caroline was arrested by the Danbury Police Department on Sunday and charged with sixth degree larceny. Sixth degree larceny is the lowest level of theft, and means that the value of property or services involved is $500 or less. It is a Class C misdemeanor, and if convicted, Caroline could be punished with up to three months in jail and fined up to $500.

It is unknown what Caroline has been accused of taking.

Caroline was released without bond on a promise to appear and her next court date is scheduled for June 20.

Caroline’s arrest on Sunday comes just a few months after the reality star revealed that she is technically “homeless” and in debt to two credit card companies. “I’m not looking for a homeless shelter to stay in, but I am homeless in the sense that I am in between homes,” Caroline revealed. “I’m not sure where I’m going to be landing geographically,” she added. “You get motels or hotels when you can, you sleep in your car if it’s warm.”

Caroline had many of her social media followers thinking that perhaps her homelessness problem was a little more severe than she was letting on when she recently posted a selfie with a tent on Instagram: 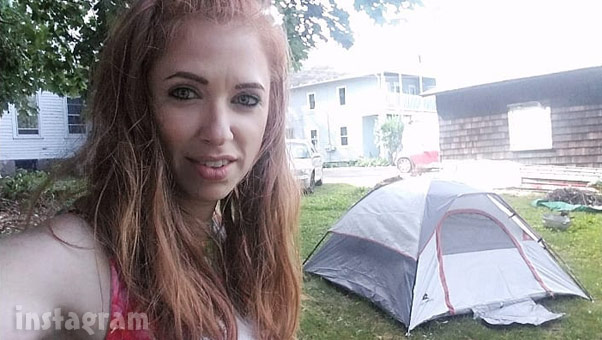 It appears as though she mentioned something about “urban living” with her initial post, but the photo is now captionless.

As far as Caroline’s credit card debt issues, she previously seemed unbothered when she boasted: “Two credit card companies are suing me, but I’ve [got] a very Jewish attorney handling it.” According to court records, Caroline is being sued for more than $12,000 between the two credit card companies. One of the suits looks to still be on hold, with the latest docket entry being a return of service on January 22.

The second case went before the judge earlier today and there was a judgment without trial in favor of the credit card company. According to the ruling, Caroline must begin making weekly payments in the amount of $35.00 beginning July 12.

Caroline has yet to address the larceny arrest publicly. We will keep an eye out and update if and when she does.

Radar Online was the first to report on Caroline’s arrest.

Caroline Bedol ‘officially not invited’ to Below Deck Reunion, Twitter deactivated after responding to suicide concerns