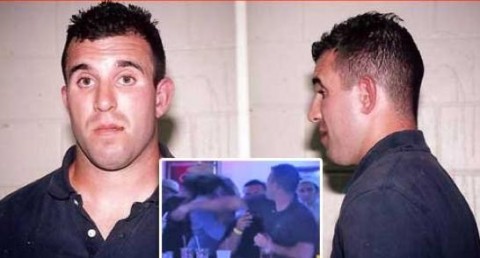 After awesome poofmaster Snooki (affectionately called Snookers or Snickers by her Jersey housemates) got clocked in the face by Brad Ferro, a gym teacher from Queens, he got arrested and hauled off, so what happened to the dude after that?

On Jersey Shore Snookers call the jail and found out that Brad Ferro had been released on bail. Brad later spoke to the NY Post about the incident claiming that he was too intoxicated (incidently on drinks he stole from Snooki and the Jersey kids) to remember that he punched a woman, but did remember punching somebody. He also apologized to Snooki (real name Nicole Polizzi), saying “I deeply regret what happened. Nobody deserves that. That was not the real Brad Ferro.”

Ferro hasn’t lost his job yet, but he’s been transferred out of the classroom and into a Department of Education’s teacher reassignment center. The Department of Ed. didn’t find out about the incident until MTV started promoting it because it happened out of state. The gym teacher was arrested on charges of assault and disorderly conduct shortly after 2 a.m. on Aug. 19.