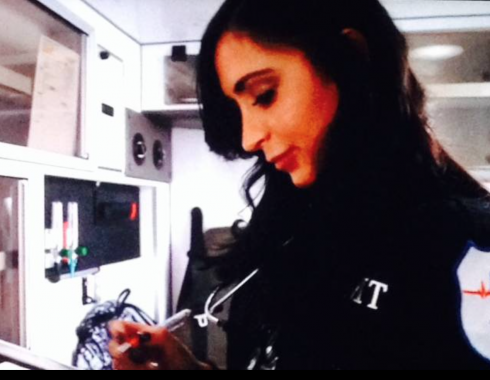 Former Jersey Shore star Angelina Pivarnick has been through a lot since she left the show during it’s second season. She’s had several rocky relationships and a miscarriage, and tried to launch a reality show via Kickstarter, but now she’s in a stable relationship and making a living as an EMT on Staten Island.

“Forever I’ve wanted to help people, so I decided to go to school and do it,” she explains on a Reality Show special edition of E! True Hollywood Story. “People really didn’t have faith in me, but I proved them wrong, and now I have a career I want.”

“I don’t think EMTs get the respect that they deserve,” she continues. “We’re the first responders. I think it’s important job because it means that I grew up a lot and I really want a real career as well. So, for everybody out there, EMTs are the sh!t.”

Last year when she started training to be an EMT, she said she saw Steve Buscemi as an inspiration for her career move because he was a firefighter before his Hollywood career took off. “I’ve been doing my research and the benefits are really good with the FDNY, and it’s like, this will be my career but if somebody wants to offer me a movie or an acting role, I can do that too,” she said at the time.

David Lee Roth also made this move. After Van Halen broke up he worked as a New York EMT for five years.

Brad Ferro Mug shot: What happened to the guy who punched Snooki/Snookers? Did he lose his job?

The Situation spotted on a date with new girlfriend, Paula Pickard!