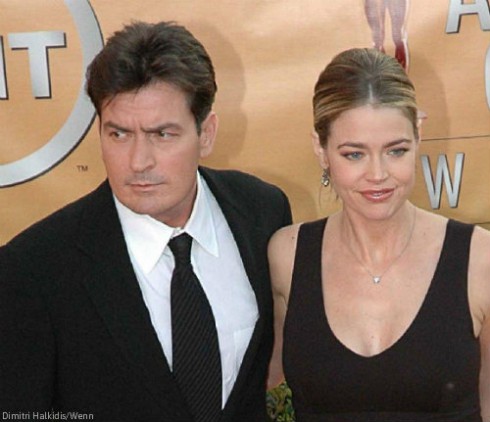 While many dads were enjoying quality time with their children on Sunday, Charlie Sheen took a very different route by verbally attacking ex-wife Denise Richards — the mother of two of his daughters — in an extended Twitter letter.

The assault began when Charlie tweeted Denise is a “heretic washed up piglet Shame pile,” while third ex-wife Brooke Mueller “is a sexy rok star whom I adore.” He’s since deleted those tweets, but a longer, more scathing rant against Denise is still online.

“Denise Richards is a shake down piece of s**t doosh phace & worst mom alive,” he said in typical Charlie prose. “A despicable charlatan who sux ISIs a**!!!! (and c**k) fu* it.”

Charlie continued to say that he’s paid “that Klay-Vinnik leaky diaper” more than $30 million, yet she supposedly still calls him a deadbeat dad. The post may have been a response to Denise’s tweet around the same time Sunday–though her message made no mention of him being a deadbeat. In fact, it’s quite the opposite:

Happy Dad’s Day! @charliesheen have a great trip in Mexico! Kids were disappointed u weren’t here for it- Hey we’ll celebrate when u r back!

Either way, Charlie continued to tear into Denise by criticizing her acting skills.

“B**ch couldn’t act hot in a fire or wet in a pool,” he said. “This gangster Sheenius will be Winning! Duh!!” After a few more insults, Charlie concluded by posting a picture of him flipping off the camera on an airplane.

Denise hasn’t directly responded, but retweeted a post from Leeza Gibbons that said, “The less you respond to negative people, the more peaceful your life will become.” Denise added, “Yup ain’t that the truth.”

Insiders told Radar Online Charlie lashed out because he wanted to take daughters Sam and Lola to Mexico with him, but the request was denied by Denise. He reportedly went on the vacation with Brooke and their twin sons, which is why she’s still in his good graces.