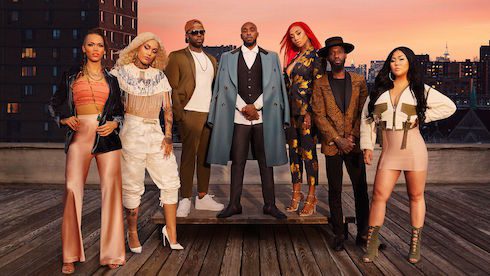 Black Ink Crew Season 8 has begun filming, and we’ve got a few early details about the cast and the premiere date. Plus, it looks like two of the cast members are trying to get their very own, relationship-based spin-off — one that most viewers probably never thought would happen, even as a joke.

First up, the Black Ink Season 8 cast news. It looks like every main cast member will be back, with the possible exception of Sky (who may just be coming back in a reduced role). Rumors of Dutchess’ return are so far unfounded. And it doesn’t look like Ceaser’s new shop in New Orleans will be getting its own spin-off; at least, not yet.

But in other spin-off news, it seems that Donna and Alex are both still very happy and very hungry together. They recently shared a post on Instagram asking fans to @ VH1 and tell the network to “cut the check” for their own reality show. The two of them wouldn’t be the first couple to get a show after finding love in a bathroom stall, but they might be among the most surprising. No one could have predicted that the man who goes by “The Vagina Slayer” would have become a fan favorite, or that he and Donna’s relationship would prove to be one of the most stable on the show:

Young Bae has also been sharing snaps of one of her Black Ink Crew Season 8 green screen looks. Since filming began at the start of the year, it’s possible that Bae’s storyline will involve a more in-depth look at the comments she made last year about women having to “suck dick” to get ahead in the tattoo industry:

But when will Black Ink Crew Season 8 premiere? VH1 has yet to announce an official date, but we actually got a pretty big clue a few weeks ago from Mr. Black Ink himself. (Also, compare the pic Ceaser shared below with the original at the top of the article and note that he cropped Melody and Donna right out.) 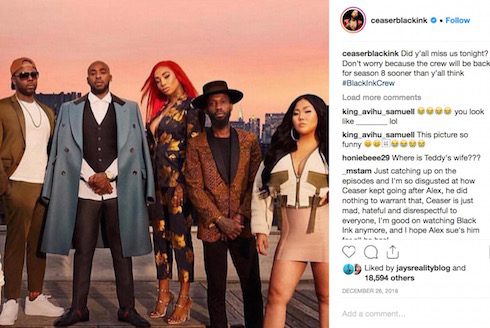 That might just sound like your basic reality TV star statement coming from Ceaser, but it’s more likely than not that we actually will see the show’s return very soon. VH1 has stepped up its production schedule for both Black Ink Crew and Black Ink Crew Chicago over the last couple of years; rather than long, 18+ episode seasons, they’ve tended to focus on slightly shorter seasons with shorter breaks between them.

For example, there was only a four-month break between Black Ink Crew Season 6 — also the longest in the show’s history — and Season 7, which was considerably shorter. The 21-episode S6 had its finale on May 9th of last year; the 14-episode S7 premiered on September 19.

And Black Ink Chicago had just a three-and-a-half month break between Season 4 (which ended in mid-September of 2018) and Season 5 (which debuted on January 2nd of this year).

All of which is to say that we’ll probably see Black Ink Crew Season 8 drop either the same night that Black Ink Chicago airs its season 5 finale or the week after that. Depending on how long Chicago runs, that could be anywhere from mid-March to late April 2019.