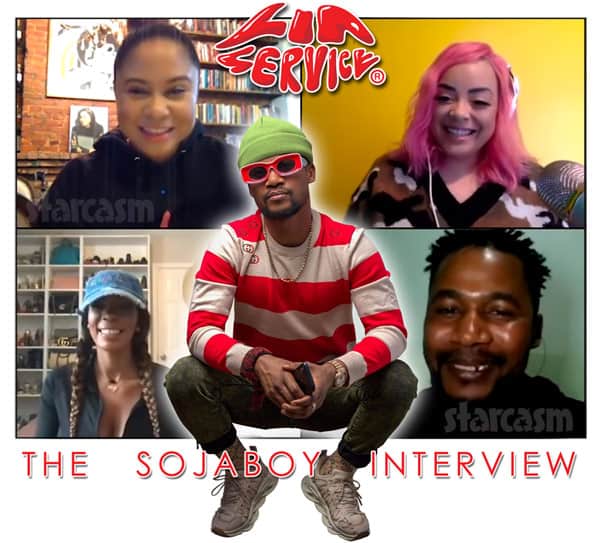 90 Day Fiance: Before the 90 Days musician Usman “Sojaboy” Umar made a live video appearance from Nigeria for an episode of the Lip Service podcast this week, and he dropped some MAJOR bombshells about his relationship with Baby Girl Lisa — including tea on their past, present, and future! In addition to claiming that he only stayed with Lisa because she pressured him with threats of suicide, Usman says that he plans to have more than one wife so that he can have children!

Usman’s appearance on Lip Service was his way of paying back host Angela Yee. Angela is also a host on The Breakfast Club radio show, and a clip from that show featuring Angela asking US rapper Soulja Boy if he had heard of Sojaboy from 90 Day Fiance went viral earlier this year. Usman saw the clip, and even shared it on his Instagram account.

Fast forward a few weeks, and Angela slid into Usman’s DMs with the hopes of having him on Lip Service. To her surprise, Usman agreed. The result is a very entertaining and very revealing 40+ minute video interview with Usman conducted by three avid female 90 Day Fiance fans from America — all of which were in their own homes under quarantine.

Usman is asked early in the interview just how he and Baby girl Lisa initially met. Usman explains that he was in Tanzania in 2014 when he met a woman from the UK. They exchanged information and remained in communication after returning to their respective countries. Usman says she was interested in taking their relationship to the next level, “but that did not work out. We just remained as friends.”

The savvy hosts are quick to ask Usman how old his Platonic British boo was. “She old too!” Usman replies.

The woman was friends with Lisa and introduced her to Usman via Facebook. (He didn’t provide any details as to how the two women knew each other.) Usman says that once he friended Lisa, she put “more pressure” on him than the woman from the UK. “That’s how we started. From there, we expanded into loving each other.”

Usman is then asked about Lisa’s claims that she was the first woman that he ever had oral sex with. “Did you really do it?”

Usman seems genuinely surprised by the questions. “No! Where you get this? Who give you this information that I go down on Baby Girl?”

“LISA!” The hosts all chime in at once. “Baby Love said she had to teach you how to work that tongue, honey!” Gigi adds.

“Maybe you misunderstood,” Usman replies. “She said that she have to teach me American way, and I would teach her the Nigerian way.”

Usman laughs. “I can’t talk about that, I’m sorry.”

The hosts take the hint and move on to asking about traditional sex. They ask Usman about his percentage comment on the show in regards to how enjoyable the sex was with Baby Girl Lisa. “We had sex and it was OK, you know?” Usman says.

When asked if Lisa enjoys having a lot of sex, Usman says “not really.”

The hosts call out Usman for not wearing a ring, and take that as a sign that the two of them are no longer together. “Listen, we are together,” Usman assures them, before explaining that his culture does not require married individuals to wear rings.

“So you’re in love with Lisa?”

“Ummmm, yeah,” Usman sort of asserts. “I have to be. I’m in love with her because somebody who has been with you for almost every day, you get used to that person. And if you don’t talk to that person, sometimes you miss him. So, by the time you start missing somebody, definitely, I think, either you love him or you care for him. So I love Lisa.”

#90DayFiance #BeforeThe90Days Usman reveals that he is "seriously SICK" but doesn't share any details. After a lot of worried speculation among fans, Doctor Baby Girl Lisa finally confirms that Sojaboy does not have coronavirus. https://t.co/szikY0rxoD

Later in the interview, Usman shared more information about how the couple’s relationship progressed over time. This is when he brings up the claims that Lisa’s threats to kill herself motivated him to stay with her.

So I was kind of like, I was thinking, because I have not any intention of coming to America, let me be honest. I know America is good. I know America is better than my country. But, this is my country. This is where I live. This is where I’m doing my things, and the things I’m doing is moving well. If today I come to America, it takes me like six months or one year for me to get paper before I can start work. So how can I go to a place where [I have to wait for a] piece of paper to be documented before I can do anything while I have where I can do my things freely? So, I know America is good, but I was not having any intention to go to America to be honest.

So when Lisa started telling me she loved me, she did this, she did that, I was, like, “OK.” Because this woman is always, you know, giving me, you know, this love stuff. And if I say no to that, she starts crying. And if you want to win my heart, if you want to force me to do anything, start crying. I hate to see anybody cry. I don’t like to see anybody cry. So maybe she used that advantage, you know? She started crying all the time, and I was, like, “OK! OK, you love me. I love you too. Then let’s move on.” But I said that because I believed she was not coming down to Nigeria.

So Lisa starts, you know, trying to hang herself, commit suicide. I was, like, “No. No.” My father is an Imam [Muslim leader] and we were taught in the way that is good for you to please somebody. It’s better I tolerate her, you know, problems — all the headaches she has given me — and make her leave, than for me to say I didn’t love her, then she go and kill herself. So, I was, like, it’s better for me to tolerate that, you know… than for me to say “I don’t love you,” then she go and kill herself because of me. So that is how it happened.

Usman says he was the one who applied for 90 Day Fiance, and once that process got started, Lisa began making arrangements to fly to Nigeria. He says he had no idea what was going to happen when she arrived, and then says she arrived and continued to press the idea that they should get married. “I know this is not going to be easy,” Usman says he told himself before Lisa arrived. “But I just have to let her come. Let’s give it a trial.”

The hosts all seemed a bit shocked at this point. “It’s like you got trapped into a relationship,” Angela Lee says.

“The point here is that I am doing this to make Lisa happy,” Usman confesses.

Angela asks Usman if he is happy. Usman responds by pointing out that Lisa can not have a child, but he wants children. “If I do this to make her happy, maybe the time is coming that I will have a child because in my religion, and in my culture, I am allowed to get married to four wives.” 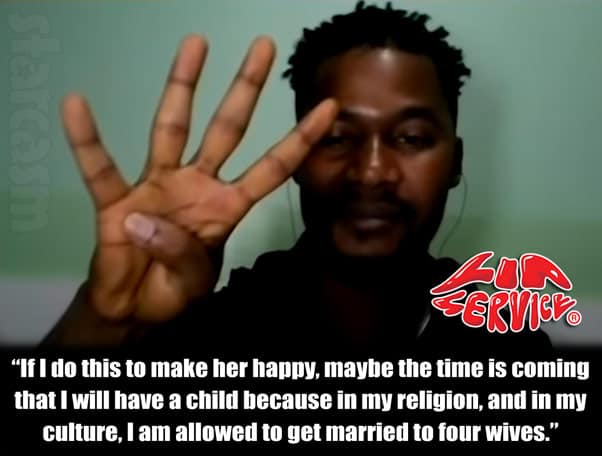 The hosts go off like a buzzing beehive after he says this — all of them insisting that Baby girl Lisa IS NOT going to let Usman have any other wives.

“You need to get this,” Usman retorts. “Sometimes you have to adopt with the way people behave. That is, when people become…part of you, you cannot get rid of them. But, they are doing the things that they are doing — you just have to take it like that, because it cannot continue. I know, this cannot going to continue forever.”

Angela is not sold and she asks Usman whether or not Baby Girl Lisa is aware of his plan to have more wives.

“Yes, she knows that,” Usman says.

“And she’s OK with it?” Angela asks incredulously.

“She’s not OK with it, but she cannot stop me,” Usman explains. “Yeah, that is the truth.”

Usman tries to explain further. “See, in as much as she cannot give child, even if we are going to stay together, I must get child. And that is to say, I have to get married to another woman. It’s definitely. Not only Lisa, whoever I am going to stay with in my life, if you cannot give me a child, honestly I have to get another wife. That is must.”

#90DayFiance @TrishaPaytas honored the true love between #BeforeThe90Days couple Sojaboy & Baby Girl Lisa by dancing to their song "I Love You" in a thong. Of course, Baby Girl Lisa was NOT HAPPY. She slid into Trisha's DMs & things went off the rails quickly! 😬 FULL RECAP pic.twitter.com/5ncCfhzybu

Uh oh. I’m going to side with the Lip Service ladies on this one! There’s NO WAY Lisa isn’t going to BLOW UP when she finds out Usman plans to morph into the Nigerian Kody Brown and that she is in line to be the Nigerian Meri Brown. 😬

I will embed the entire Usman Lip Service video interview below. I highly recommend that any big fan of the current season of 90 Day Fiance: Before the 90 Days check it out! Usman is charismatic and good-natured as he tackles a wide range of topics including the fate of Barney the goat, why he told his family that Lisa was doctor, and just how many women are currently sliding in his DMs. Plus, you can see impromptu Sojaboy performances of his songs “Dabbing” and “Connect.”

BEFORE THE 90 DAYS Spoilers: More details on Yolanda and Williams’ relationship from their Instagram and Facebook accounts

BEFORE THE 90 DAYS Stephanie responds to Erika’s comments on her bisexuality, reveals spin-off pitch & more