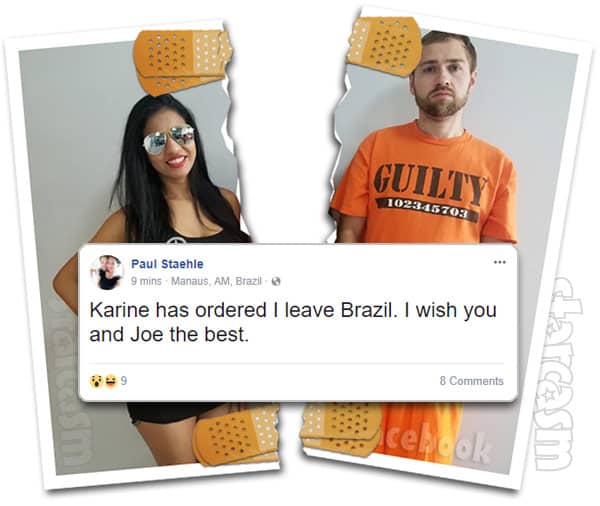 Just two days before Valentine’s Day it appears that Before the 90 Days couple Paul Staehle and Karine Martins’ on-again, off-again relationship is OFF with capital letters, as in “Get out of my country!” off.

Paul took to his Facebook page and posted a brief message earlier today: “Karine has ordered I leave Brazil. I wish you and Joe the best.” Much like his relationship with Karine, Paul’s Facebook is infamously on-again, off-again and is now OFF.

If you’re curious who “Joe” is, that is a guy named Joe Devito who Karine reportedly pitched some virtual woo at back in November. Perhaps Karine reached out to him again and Paul caught her?

UPDATE – Joe reached out to us and explained that he met Karine via Instagram a few months ago when she hit him up for physical training tips. Joe was happy to help and the two developed a friendship. Some of their online conversations were posted in a 90 Day Fiance Facebook group and were taken out of context by Paul when it became a joke to refer to Karine as Joe’s girlfriend. Joe points out that he is gay and has no interest in Karine sexually.

You might recall that Paul and Karine previously split over some guy named Alex that Karine was reportedly sharing hot and steamy texts with. I don’t think Alex and Joe are the same person, but I cannot be sure. (Joe is definitely an actual person with an Instagram account, etc. We don’t know anything about “Alex.”)

Oh, and I’m not sure if this has anything to do with Alex, but before his Brazilian boot post, Paul shared a link on his Facebook page to an attorney that handles revenge p0rn cases with no explanation.

There is also speculation that perhaps Paul and Karine have gotten married in Brazil! In addition to Karine changing her last name to Staehle on Instagram, there was a curious comment from 90 Day Fiance star Jason Hitch on one of Paul’s Facebook posts. Paul talks about making some videos for fans, but mentions that he is only allowed to talk about what happened in Season 1. “You can’t say you married in Brazil yet?” Jason asked in the comments section. “No rings on our fingers,” was Paul’s reply.

UPDATE – We now have a Paul and Karine wedding photo and lots of evidence to suggest that it is the real deal! Click the link for all the details!

It has been widely reported that Paul and Karine have had difficulty with the K-1 visa process, and she has mentioned that they are looking at other options. In our recent post about Nicole returning to Morocco to get married to Azan, we talked about the CR1 visa process, which is a visa for someone that you are already married to. Perhaps Paul an Karine got married in hopes that it would improve their chances of her getting a visa to come to the US?

And then there is this perplexing post from Paul:

I don’t have the slightest clue what to make of that! Why would federal police want Paul to stay because his visa is expired? Sometimes it seems like Paul is Alice in Amazonland and his story just keeps getting curiouser and curiouser.

Also unclear is what impact Paul and Karine’s potential split (like, for real split) would have on their future with TLC. The couple has been filming extensively over the past few months, so I cannot imagine that the network would bail on all that footage completely. My guess is that if the two are really done for good, they would be part of the network’s second installment of Before the 90 Days.

We will keep our eyes out for Paul’s return to social media or for updates from Karine, so Staehle tuned! 😉

I will wrap this up with our seemingly appropriate Paul Staehle poop water animated gif: