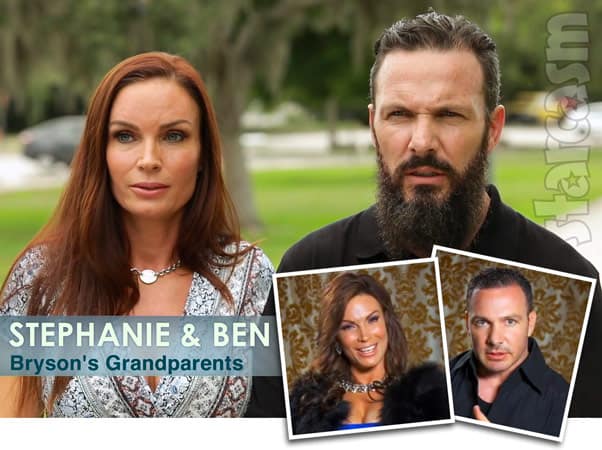 When 90 Day Fiance viewers were introduced to Bryson’s grandmother Stephanie Woodcock, her face (and much MUCH more) may have been recognizable to some 18+ viewers because she is a rather successful adult film star who goes by the name Diamond Foxxx. But, grandma Stephanie may also have been familiar to some viewers whose viewing habits are strictly SFW because she has appeared on a TLC reality show before!

Stephanie was featured in the premiere episode of Brides of Beverly Hills that aired in October of 2011. On the episode, Stephanie (who was featured as adult film star Diamond Foxxx) was shopping for a dress to wear for a vow renewal ceremony with her husband of 12 years, Ben.

Among the challenges faced by bridal shop owner Renee Strauss was being able to find a gown that would look classy while still being able to contain and support Diamond’s size 32G breasts. ?

I managed to track down a preview clip from Diamond’s episode, but the two-minute video focuses more on her husband Ben as he meets famous Beverly Hills wedding planner Kevin Lee for the first time.

“How do you handle your wife being a p0rn star?” the always blunt Kevin asks.

“You know, it’s really not that big of a deal,” Ben replies.

Kevin reacts without restraint. “Oh my god! Oh my god! It’s not a big deal for you, but it’s a huge deal for me!” he exclaims. “So you don’t get jealous? Or, you don’t feel, like, insecure?”

“No, no,” Ben says. “I mean, she’s still coming home to me. I know all the people she works with.” Ben later reveals to Kevin that he is often on set when the videos are recorded.

#90DayFiance Bryson's grandparents Ben & Stephanie have been rough on Robert's fiancée Anny, but they apparently have their own issues because Ben was arrested for domestic battery in 2016 after an altercation with Stephanie that included Bryson's mom! ? https://t.co/sTqQdPx6Sj

We then see Ben explaining more directly to the camera in an interview segment recorded in the studio. “What people don’t understand, there’s a p0rn sex, and there is, like, a married sex.”

Here’s the clip, which also includes Diamond (aka Stephanie) awkwardly explaining to an employee of the bridal shop what she does for a living:

Here is a behind-the-scenes photo with Diamond Foxxx in a wedding dress:

Unfortunately for Renee Strauss and Kevin Lee, Brides of Beverly Hills was cancelled by TLC after just two seasons. If you’re curious to know a little bit more about the show, here is the blurb from the TLC promotional packet:

Extravagant new series, The Brides of Beverly Hills gives an inside look into the hearts and wallets of Beverly Hills’ over-the-top brides. Making those brides’ dreams come true is Renee Strauss, owner of Renee Strauss for the Bride, one of Beverly Hills’ premier bridal boutiques. Follow Renee and her colourful team of stylists, including wedding planner Kevin Lee, who was the inspiration for Frank in the movie, Father of the Bride, as they navigate the dramatic personalities and demands of these high maintenance wives-to-be. Experience the tears, laughs and quirky tales about the clients’ star-studded lives as Strauss and her team help each bride to find the perfect dress and to transform her biggest dreams and unlimited budgets into the perfect day. From elegant to outrageous, glitz and glam, to botoxed faces and temper tantrums, this series gives viewers an intimate and up close view of the bridal business.

To see more of Diamond Foxxx, just tune in to new episodes of 90 Day Fiance airing Sunday nights at 8/7c on TLC! Or, you could just head on over to Google, turn your Safe Search off, and find A LOT of Diamond Foxxx there.