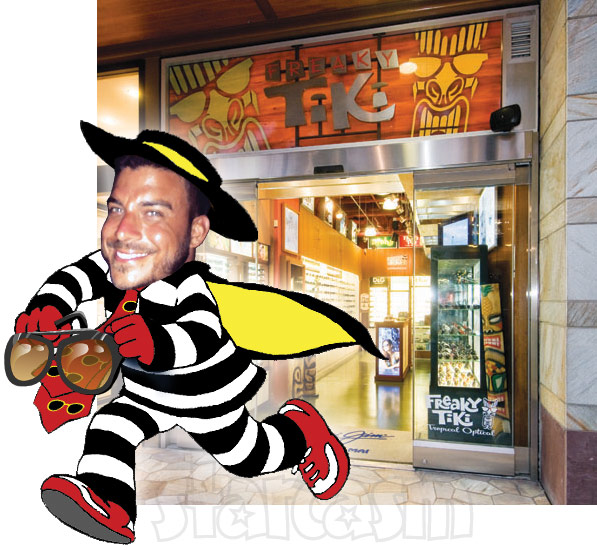 Vanderpump Rules star Jax Taylor was arrested in Hawaii over the weekend and charged with felony theft for allegedly stealing a pair of sunglasses valued at over $300. The hunky reality star is currently out of jail, but he may have a hard time beating the rap because surveillance video camera footage released online today seems to clearly show him leaving the store with the sunglasses without paying.

The security camera footage is from a Freaky Tiki Tropical Optical (damn that is a fun thing to say!) store in Honolulu, and was obtained by TMZ.

The two different angles leave little room to doubt that Jax stole the sunglasses, and his body language suggests it was no careless or forgetful accident.

In addition to documenting Jax’s five-fingered discount skills (or lack thereof apparently), the video also shows Jaw being apprehended by police just outside the storefront.

As I mentioned above, Jax has since been released from jail and has returned to California. He has also returned to social media, but he has yet to address the sunglass theft charges. We’re still waiting for Jax Taylor’s mug shot photo, which promises to be one of the handsomest reality star mug shots since The Bachelorette‘s Kasey Kahl!