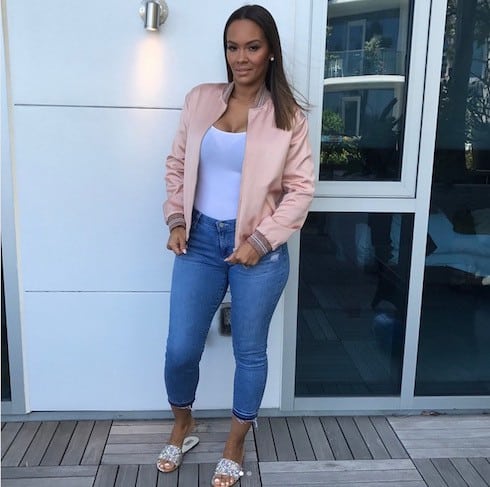 You might be surprised to hear this, but Evelyn Lozada and Jackie Christie really aren’t getting along on the new season of Basketball Wives. (It’s shocking, I know.) Their beef over Evelyn’s donation to Jackie’s daughter Takari’s GoFundMe page to help cover medical expenses for her son Jaxson’s burns has become the biggest storyline of the season so far. And, while it’s not your typical processed reality TV drama, the main reason that this storyline functions is because Jackie and Takari are estranged and Takari’s constant needling of her mother–in the form of spilling lots of family tea–means that Jackie will always take it personally when any BBW cast member does Takari a kindness.

Thus far, Evelyn has mostly taken the high road when faced with Jackie’s insults. But her recent appearance on The Real marked the first time she’s clapped back against Jackie in public–and she did so by wondering just what the big deal is. “It’s not like I donated money to Beyoncé’s kid,” Evelyn said, to a sympathetic panel and a dead-silent audience. You can read the silence as either the audience’s “Oh no she didn’t” moment or as the chirping of crickets that comes when an insult bombs. (Your own interpretation likely depends on whether you’re #TeamEvelyn or #TeamJackie.)

The same clip features Evelyn explaining exactly why she felt moved to donate money to Takari Lee’s son. When Joseline Hernandez asked whether Evelyn did it for the publicity or because of what was in her heart (a softball question if ever one was 😉 ), Evelyn got emotional. “When I sent the money it was really just me connecting with this–like, her grandson’s picture was all over social media,” she said, her voice quivering. Evelyn described the photo of Jaxson’s burns and said that her only thought was of her own son. “TMZ reached out,” along with other media outlets, but Evelyn claims she “just gave the money, and that’s all it was.”

#Repost @therealdaytime Monday on a BRAND NEW #TheReal, @EvelynLozada gives us the 411 on why she decided to donate money. Check out this clip, and be sure to tune in for more with the #BasketballWives star this MONDAY!

Of course, Jackie was quick with her retort, and made sure that her own shade required fewer words:

It’s also worth pointing out that Lights to a Shadow, Takari Lee’s book about growing up in what she describes as an emotionally and physically abusive relationship with Jackie Christie for a mother, is now available for pre-order. The excerpts Takari has shared are pretty brutal; they definitely don’t read like the work of someone simply playing up a minor grudge for the sake of television ratings.

VIDEO Preview of Evelyn Lozada’s emotional appearance on the premiere of Iyanla: Fix My Life