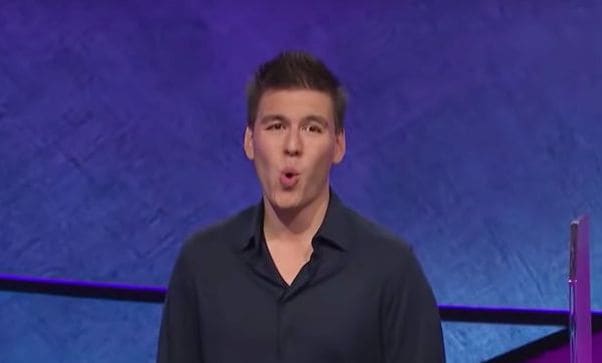 Did you know that there are five banned wagers on Jeopardy? I sure didn’t, and I’ve been shouting at contestants from the comfort of my couch for as long as I can remember. But it turns out that there are, and that if I were smart enough to be on Jeopardy in the first place I would have realized that of course you’re never going to see the banned wagers on the show itself. (Also, apparently I was napping on that couch when this story made the digital rounds a few weeks back, so first of all a big tip of the hat to The Blemish’s coverage.)

It also turns out that at least one of the five is a relatively recent ban. The general unmasking began two months ago, when one of the contestants from the March 14th episode discussed their appearance in a Reddit thread dedicated to just that. During the discussion, the contestant mentioned how the break between the Final Jeopardy category reveal and the answer itself helps clear one’s head, and that during the break, the producers come onstage to, among other things, “mak[e] sure we’re not making a disallowed wager like $69.”

A few weeks later, in a response to his viral tweet about “making small, sensible Jeopardy wagers” to help with the show’s budget, 75-day champion Ken Jennings confirmed that $69 is no longer a valid wager. Jennings had a habit of wagering just that amount in the Final when the game was a runaway, but it’s not permissible under the show’s current rules:

this is officially forbidden on Jeopardy now, as of last year.
not even joking.

The next day, five-day champion and 2010 Tournament of Champions 2nd runner-up Stefan Goodreau revealed that another of the banned wagers on Jeopardy is $1488. Evidently, at some point in the last few years a contestant made such a wager in order to reach a personally relevant figure, but without realizing the significance of the number 1488, and the whole sequence had to somehow be edited in post-production:

Someone wagered $1,488 (innocently) and they had to change it in post, and I guess they decided that there were a few numbers that would be off limits as wagers.

In case you were blissfully unaware, both “14” and “88” are coded references to white supremacy. So, both of those numbers are banned wagers, as well. And the fifth is just a good, old-fashioned $666.

While banning 69 is unquestionably sad, it’s also unfair that white supremacists have apparently ruined 14 and 88 for everyone else. If only 8 still stood for Martin Van Buren, the 8th President of the United States, the way God and Kramer intended.

(Photo credits: Banned wagers on Jeopardy via Jeopardy!; h/t to The Blemish)

What does Halt and Catch Fire mean?