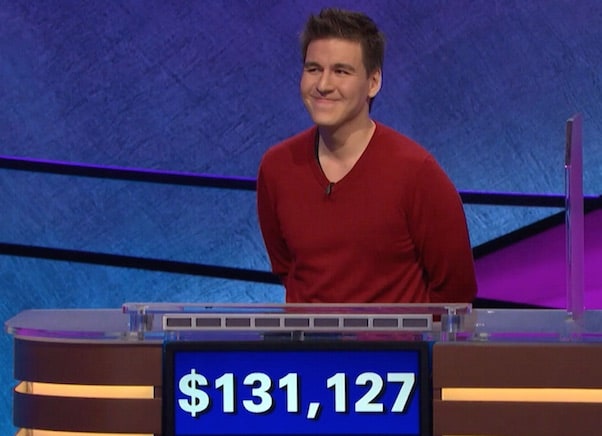 James Holzhauer has been rewriting the Jeopardy! record books like a mad fiend of late. The Chicago-area native has already nearly doubled the single-day earnings record, and earned several other impressive top spots during his eleven-day romp. As of this writing, Holzhauer is still the current Jeopardy! champion (and it’s becoming difficult to imagine anyone else winning the game). But what’s the most you can win on Jeopardy in one episode? And how close has Holzhauer come?

First of all, we need to keep in mind that there are four opportunities to double your score in a game of Jeopardy!: the single Daily Double in the first round; the two Daily Doubles in the second round; and the Final Jeopardy wager. In order to maximize the Daily Doubles’ usefulness, all three of them would need to be worth the lowest possible amount: $200 in round one, and $400 each in round two.

From there, it’s simple multiplication once again. Bet the entire $283,200 and get the Final Jeopardy answer correct, and you’ve just answered the question What’s the most you can win on Jeopardy: $566,400.

How long are the odds of winning the Jeopardy! daily maximum?

Now, a few caveats. Though technically the odds of getting a $200 or $400 Daily Double are 1-in-30, Daily Doubles are rarely in the lowest-value spots on the board. And from there, the odds only become more daunting. As The Mary Sue points out, “the odds of the last clue on the board being both the lowest value AND the Daily Double in the Jeopardy round is 1 in 150.”

But that’s not the end of the unlikeliness:

The odds for Double Jeopardy are worse, because you need the two Daily Doubles to BOTH be the lowest value AND the last two picked. You have just a 1 in 12,615 chance of that being the case in the second round. Combine that with the requirement that the Jeopardy round also end on the Daily Double and the odds are 1 in 1,892,250.

And beyond even knowing the correct answers for all 61 questions, there’s the more complicated matter of having the willpower — or ignorance, depending on how you look at it — to actually bet your entire earnings every time. As Holzhauer explained for the Arlington Heights (IL) Daily Herald, part of his strategy was being willing to risk more than most players in his position.

“When I watch at home, I always root for the contestants to bet big on Daily Doubles,” Holzhauer explained. “They get them right most of the time, and it can give them a big leg up on the competition. I’m proud of myself for sticking to that attitude when it was my money on the line.”

Holzhauer is currently best known for breaking the Jeopardy! single-day earnings record. Roger Craig set the old mark of $77,000 on September 14th, 2010, but Holzhauer has bested that total four times in the last eleven episodes. So far, the best he’s done was a whopping $131,127 on the April 17th, 2019 episode. Holzhauer, who’s won $771,920 in eleven days, also holds the highest per-game average winnings of any champion, at $70,174.54 per game.

As a function of the maximim possible single game Jeopardy winnings, though, even Holzhauer can’t come very close. $131,127 is just 23.1% of $566,400. Bizarrely enough, it turns out that Holzhauer in this one sense still has more in common with The Weakest Link contestants from back in the day. Players on TWL were often lambasted for the small amounts of money they put in the show’s bank relative to how much they could have saved. In fact, during the entire original run of the US Weakest Link, the players banked a perfect round only one time:

But let’s be clear: that is just an oversimplification of some extraordinarily long odds. We shouldn’t expect to see anyone come particularly close to the half-million dollar mark on Jeopardy! anytime soon — and we shouldn’t expect future contestants to treat the Daily Doubles the same way, either.

(Photo credit: What’s the most you can win on Jeopardy via Jeopardy!)