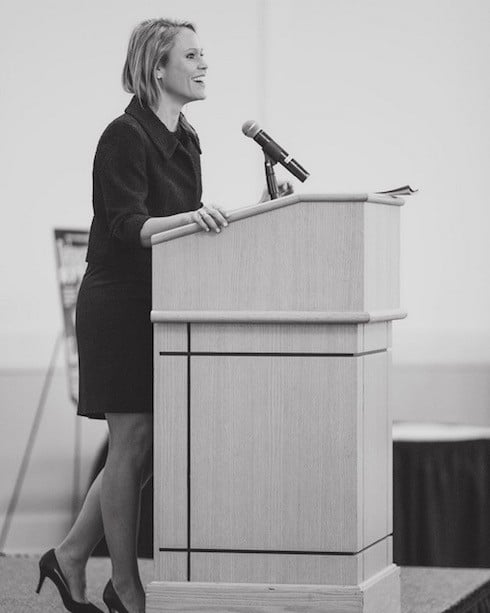 In the run-up to Big Beach Builds‘ big DIY premiere, much has been made of star Marnie Oursler’s pedigree: she’s the fifth generation in her family to make a living from construction and home building. In addition, Marnie’s success story is something of an industry-wide outlier; she began Marnie Custom Homes, her own business, just as the housing market was collapsing and America was heading into financial crisis.

In fact, as Marnie recently revealed, she found her way despite twice going against the advice of her father, under whose tutelage Marnie made her bones as a teenager. And the second time, when Marnie accepted her first offer to do a custom construction, came right at the very edge of the industry’s collapse. “In like the spring of 2007,” Marnie told Mixergy, “I remember calling my dad and I said, ‘I’m going to bid on a house to build.’ He said, ‘You are crazy. Do you realize what’s going on in the economy right now?’ And I said, ‘Yeah, that’s why I’m going to do it.’ He said, ‘No, do not get into this industry.'”

Marnie had reason to be confident–she got the house flipping bug (and later moved into original construction) after clearing a $100,000 profit on her first flip. Plus, before getting into the construction side of things, Marnie had been a successful real estate agent: her two-year stint with Beazer Homes resulted in a Rookie of the Year award “for all national builders in Delaware” after she sold an eye-popping 74 homes–slightly faster than one every five days. (Of the four financial quarters that Marnie spent with Beazer, she made the national top 10 lists for Highest Sales Volume and for Most Units Sold two times each.)

Today I had the immense pleasure and honor of meeting with Delaware governor @governormarkell and speaking to the #Delaware House and Senate! We talked about #BigBeachBuilds and its impact on the state I love. Such an exciting day that I'll truly never forget!

All of which is to say that “hustle” is a word with which Marnie is very familiar. So it should come as no surprise that, when Marnie revealed her company’s yearly revenue in her interview with Mixergy, the figure was robust indeed: “Between $7 and $9 million a year,” Marnie said, which is “just the price of the homes we build.” Though Marnie maintains her real estate agent’s license, she explained that those days are behind her: “I don’t sell any homes. I don’t do any spec homes. People have a lot, so they already have a home site and they come to me to design it and build it.”

And, as Big Beach Builds will soon make abundantly clear, Marnie deals in beachfront homes: “Yes,” she confirmed, “[my homes] are all within walking distance to the beach. Some are beach block. Some are oceanfront. The others that we do our usually on the bay or some sort of body of water. So I focus on the water.”

Snow definitely adds a whole other layer to construction! ?❄️

As far as her show goes, all reality TV-based contracts are kept under fairly tight wraps. But we do know that the budgets of shows on HGTV and DIY generally involve a per-episode talent fee for the star and related construction crew, in addition to a percentage of the total cost of supplies and labor. That fee varies from show to show and network to network, but it’s probably worth pointing out that Marnie is better-established in the field than Chip and Joanna Gaines were when they were getting a reported $30,000 per episode for Fixer Upper.

And as for marveling over the chain of events that got her to where she is today, it sounds like Marnie is the kind of person who believes that you make your own luck. “A lot of people say, you just got lucky,” she told Forbes last year. “But there’s luck–and then there’s seeing those opportunities and seizing them.”

You can catch Marnie and her crew in action on Big Beach Builds: the show airs Monday nights at 9 on DIY.

How much does Kylie Jenner’s baby carrier cost?

Weight Loss News: People are sewing plastic patches on their tongues to make it painful to eat