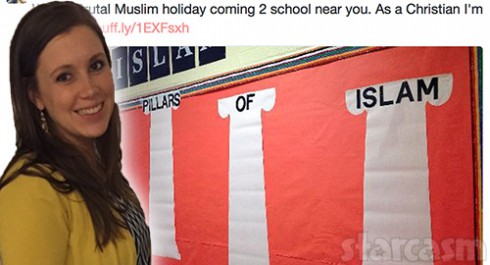 Last week, de Blasio announced schools will shut down for two additional days starting next year in observance of Eid al-Adha in September and Eid al-Fitr in July.

“This is about respect for one of the great faiths of this Earth,” he said, explaining he was also concerned when 36 percent of the students from one school in the district were absent the last time Eid al-Adha fell on a weekday.

Although the response to de Blasio’s decision seems to be largely positive, not everyone approves — including Anna.

“WOW. Brutal Muslim holiday coming 2 school near you. As a Christian I’m offended,” reads the tweet in question, which was originally posted by Act For America’s Brigitte Gabriel, who describes her organization as “fighting Radical Islam’s attempts to infiltrate and take over the West.”

Although Anna didn’t pen the tweet, she was swiftly criticized for reposting it.

“That is pretty intolerant of you,” one responded to Anna.

Another noted that Eid al-Adha actually honor’s Abraham’s willingness to sacrifice his son to God, which is also described in the Old Testament’s Book of Genesis. That person said, “Wow, anna, really?… Just fyi, one of those ‘brutal muslim holidays’ commemorates a bible story.”

As with the February incident, Anna hasn’t responded her critics. The tweet is still posted.

Duggar Digest: Throwback pictures, why Jill Dillard’s ‘conception date’ is before her wedding and the family visits Ohio