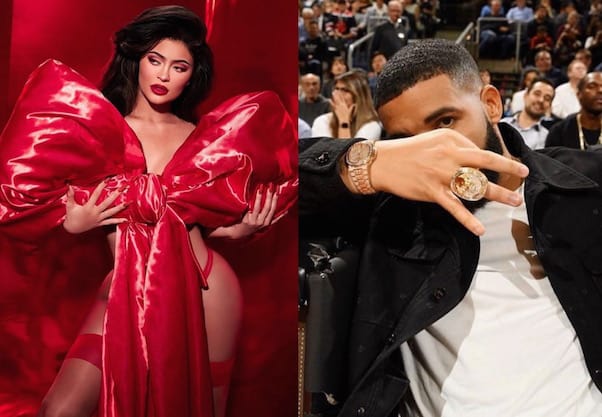 It sure sounds like this pair is spending plenty of time together on the DL — but are Kylie Jenner and Drake together, as in together-together? Or are they just meeting in hotel rooms occasionally and also better at keeping secrets than, say, Justin Timberlake on a movie set? It sure *sounds* like Kylie and Drake have something going on; the question is whether it’s just a casual fling based on long-simmering mutual attraction, or a more serious romantic interest complicated by babies and money and camera flashes.

Though their PR people would probably prefer otherwise, this couple has been in plenty of headlines lately. First, they were spotted snuggled up at a Halloween party. Then, a couple of weeks ago, we got a few articles about how they’ve been hanging out “romantically” and also have been “friends for a long time” and so hint-hint (intriguing also because it suggests Drake never flexed on Tyga when he totally could have and was no doubt tempted to do so). And then of course came the counter-PR programming suggesting that Kylie and Drake are “just pals” and Kylie is “just being a mom,” as if single moms and billionaires never keep one or two on the side.

So: are Kylie Jenner and Drake together as of this moment in the gossip cycle? While it might sound as though they’re passing notes through friends like smitten eighth graders, I’m convinced that they have a standing date at some Presidential Suite somewhere near Calabasas and their reps are trying to get out ahead of the inevitable discovery. Check out the relevant bits from Us Weekly‘s latest and see for yourself:

“Drake has always had a thing for Kylie and it’s mutual,” the source explains. “They hang out here and there and have been more recently than in the past because Kylie is technically single right now and the two of them live so close to each other.”

…“They have known each other and been friends for a very long time and there has always been a spark there, but their situation is complicated and so is Kylie’s with Travis,” the source says, referring to Jenner’s ex-boyfriend Travis Scott, with whom she shares 21-month-old daughter Stormi.

“Drake and Kylie don’t want to jeopardize their friendship by crossing any major boundaries,” the source continues. “Drake doesn’t have any intention of taking on a fatherly role with Stormi and he wants to have fun with Kylie with no strings attached and continue to have a friendship and be supportive of one another.”

“Always had a thing” of course refers to the dating rumors about these two going back almost three years. But as any even casual reader of Kardashian gossip knows, “hang out here and there” is code for “banging in a hotel room.” It’s the same line we got when Kendall Jenner and Blake Griffin started wearing sweatpants in public together. Likewise when Kourtney Kardashian and Justin Bieber graduated from clandestine 3 AM smash-and-grab sessions to sharing a toothbrush and tormenting their exes together.

And yes, their “situation” is indeed “complicated” mostly because Kylie has a baby, but, also, no it isn’t? Kylie is an adult woman. She’s currently estranged from the man with whom she had a baby, and is under no obligation to that man beyond hiring excellent caregivers to raise that baby. And if you do nothing more than transpose the words “woman” and “man” in those sentences you get Drake’s exact situation. These two are rich, they’re into each other, and they know how to get around in secret. Articles like Us‘ are as close to a confirmation of sexy times as you’re going to get before some lucky paparazzo photographs undeniable middle-of-the-night proof.

(Photo credits: Are Kylie Jenner and Drake together via Instagram)