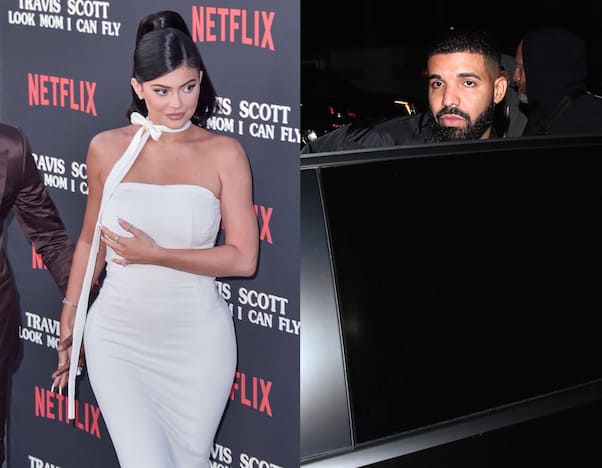 Kylie Jenner and Drake are back in headlines after allegedly maybe getting together on the DL. Since the story broke, PR people for both sides have caught up with the story and for the most part tamped it down with well-placed quotes involving the words “just friends.” But it might be worth wondering if there was maybe more to the original gossip, since this isn’t the first time talk of Kylie and Drake dating has gotten out.

Devotées will recall that all the way back in 2017, Kylie and Drake were connected via Kris Jenner, who was allegedly trying to hook the two of them up. Kris reportedly wanted her daughter to “give Drake a chance,” and was eager for Kylie to “get out there and start dating” following her eighth breakup with Tyga.

Of course, it turned out that Kylie wasn’t single for long: she started dating and got pregnant by Travis Scott just a few weeks later. Since then, she’s given birth to Stormi, become a legit billionaire, turned 22, and broken up with Travis, with whom she might supposedly still want to have another baby sometime in the near-ish future.

Framed this way, you could consider the idea of Kylie and Drake dating sort of like her second relationship level-up. Travis Scott was an improvement over Tyga in terms of profile, stature, talent, bank account — the list goes on. And Drake is another level beyond Travis: he’s who you’d expect to see on a billionaire’s arm at a Netflix red premiere.

The Kardashian-friendly People was the first to report on the second round of Kylie and Drake gossip. Here are the relevant quotes from their three (!) anonymous sources (with People‘s article retained where necessary for the quote):

“He and Kylie have been spending time together recently. They’ve been friends for a long time and Drake is very close to the family.”

…Kylie, 22, and the rapper, 33, have been hanging out “romantically” since she and Scott called it quits in October.

However, while some close to the Keeping Up with the Kardashians star and the “In My Feelings” rapper see a potential romance blossoming, another insider insists the duo are “just friends.”

…[Kylie] was also spotted at Drake’s Halloween party in West Hollywood on Thursday, a source tells PEOPLE, adding that she stayed “super late.”

It might actually be four sources, depending on whether or not the final quote comes from one of the three already mentioned. Assuming it’s three different people, the first one suggests Kylie and Drake are getting together with a wink and a nudge; the second outright drops the R-word; and only the third source pulls back on the reins.

Shortly after People published their take, TMZ came hard in the opposite direction. According to their article, the two “are not spending any romantic time together,” are just “pals,” and Kylie is “happy for now just being a mom to Stormi.” TMZ doesn’t generally have a pro- or anti-Kardashian affiliation; they’re also not averse to publishing reaction pieces intended to counter other tabloid narratives.

As far as Kylie and Drake dating and his high profile goes, I wonder if it’s also hard for some of the men who’ve been linked to Kylie in the past few months to realize that they’re always going to be the second-biggest star in the relationship. Kylie’s own public profile has exploded over the past few years. That, combined with her staggering wealth, means she’s more like a supermodel-plus-mogul than just the surgeried reality TV star a lot of people still consider her to be.

In this sense, her age probably doesn’t help. When she does start dating openly, Kylie will likely want someone very similar to Drake: older than her (or anyway more mature than someone Kylie’s age), used to their own spotlight, and unthreatened by hers. If nothing else, it would be a genuine shock to see her ever back with Tyga again.

Here’s how much money Kylie Jenner makes from Instagram alone