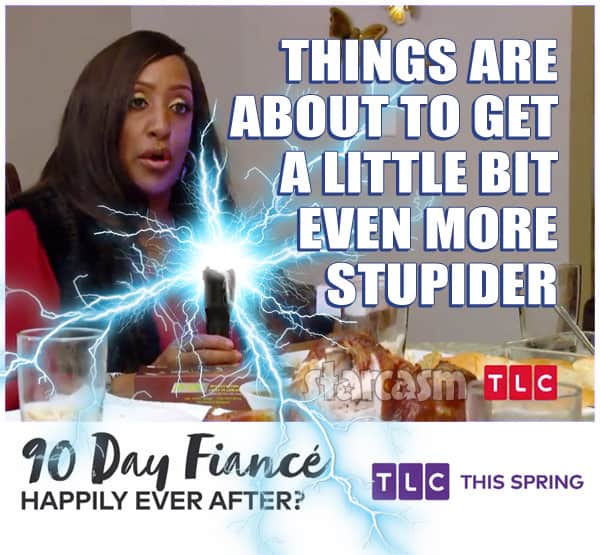 Things are about to get a whole lot more stupider a little bit! TLC has just released two new preview clips for 90 Day Fiance: Happily Ever After Season 4 — and we have a rumored premiere date!

Let’s get right to those preview clips — which are both centered on Family Chantel. The first features Chantel and hubby Pedro in a car as Chantel’s mom invites them to attend Thanksgiving at her “casa” on speakerphone. The conversation is just as awkward as you would expect:

Gearing up for the most uncomfortable Thanksgiving dinner ever??Here's a sneak peek at the new season of #90DayFiance: Happily Ever After, returning this Spring!

Next up, we have an extended version of a preview clip that TLC shared back in January in which the Family Chantel are gathered around the dinner table (EEEEK!) for the Thanksgiving meal teased in the clip above. And that’s when Mother Chantel introduces everyone to “Shocky.”

Mother Chantel has a SHOCKING plan for anyone who comes after her family!! #90DayFiance

To recap: Mother Chantel is looking to curtail any more outbursts like last season’s headline-grabbing dinner table fracas with the help of a taser. I’m thinking maybe it’s a good thing that Pedro opted out of Thanksgiving dinner at the Family Chantel casa!

Neither of the preview clips reveal a premiere date, they merely state that Happily Ever After Season 4 will return “this spring.” However, a 90 Day Fiance social media mogul John Yates claims to have gotten the scoop! “I’ve just been informed that #90DayFianceHappilyEverAfter’s new season will premiere Sunday, April 28th!” he revealed on Instagram earlier today. I could find nothing to either verify or disprove the claim, although that certainly seems like a long time away!

Some fans are already speculating that production may have been delayed a bit because producers changed their minds on some of the controversial 90 Day Fiance Season 6 cast members that were initially going to be included. As we previously reported in our Happily Ever After Season 4 cast speculation post, it was believed that we would be seeing Colt and Larissa, Ashley and Jay, and Jonathan and Fernanda coming back as new HEA cast members.

It seems all but confirmed that Ashley and Jay are now out, and the other two relationships are such a mess that it could be that TLC opted to bail on them as well. Of course, most all of us know at this point that TLC is not afraid of filming a mess or two!

As far as the other Season 6 couples, I’m not seeing Steven and Olga’s name being talked about much in regards to Happily Ever After cast rumors, but they seem like shoe-ins to me. Kalani and Asuelu DID NOT have a good experience doing the show, and I would be surprised if they elected to continue filming. Eric and Leida are such an epic, non-entertaining sh*t show that I think even TLC would consider them too messy.

The rest of the Happily Ever After Season 4 cast is rumored to include 90 Day Fiance SUPERSTARS Nicole and Azan as well as OGs Russ and Paola. I’m hearing Danielle Jbali’s name mentioned as well, but I just don’t see her fitting on this show. I’m a huge Danielle fan, but her without Mohamed on Happily Ever After seems like a big stretch.

So who are you most excited to see return for the new season? While you ponder that question, I will send you off with a slightly altered portrait of fan favorite Family Chantel sibling, Sideshow River, in which he fully realizes his role as the Queen’s Guard: 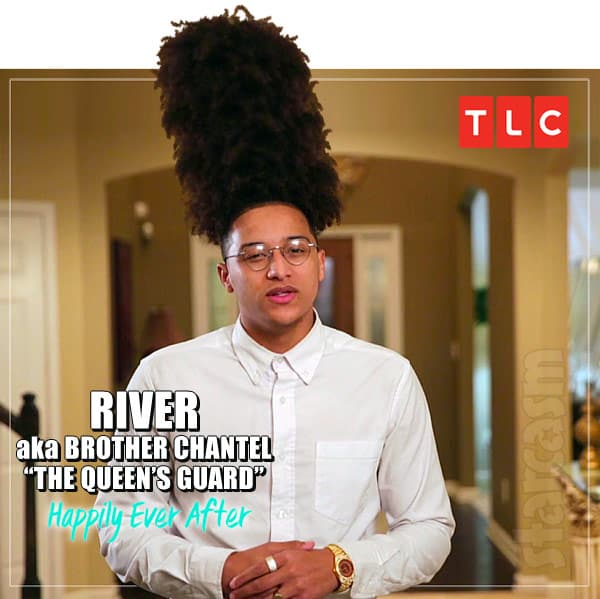