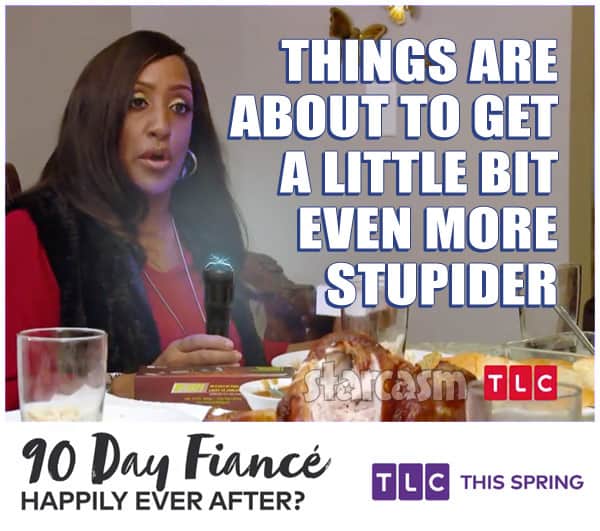 90 Day Fiance just finished its most dramatic and controversial season ever, but TLC isn’t going to be giving viewers much of a break as they have just shared the first preview trailer for Happily Ever After Season 4 featuring Family Chantel!

“Season finale blues?” TLC asked on Twitter. “It’s not goodbye, it’s see you later!” they added, along with a kissy face emoji and the following video:

Season finale blues? It's not goodbye, it's see you later! ?#90DayFiance pic.twitter.com/rRKunCgRou

In the clip we see Pedro doing his best Dirty Dancing impersonation with some other woman as we hear Chantel provide narration. “This is the final straw. Pedro has lost my trust,” she says.

Without so much as a trigger warning, the clip then jumps to one of the most frightening things in the entire 90 Day Fianceverse: a Family Chantel dinner scene! “I will introduce you to ‘Shocky,'” Chantel’s mom says, before then opening a box and removing a device that looks like a flashlight or something similar. “This is a way to show a person the door,” she adds as she turns on the device and reveals it’s a taser!

TLC has not announced a premiere date for the new season of Happily Ever After, merely that it will return “this spring.”

Chantel has yet to respond to the preview on social media, but she did respond to a nagging question that she gets asked ALL THE TIME – Did she have a boob job? 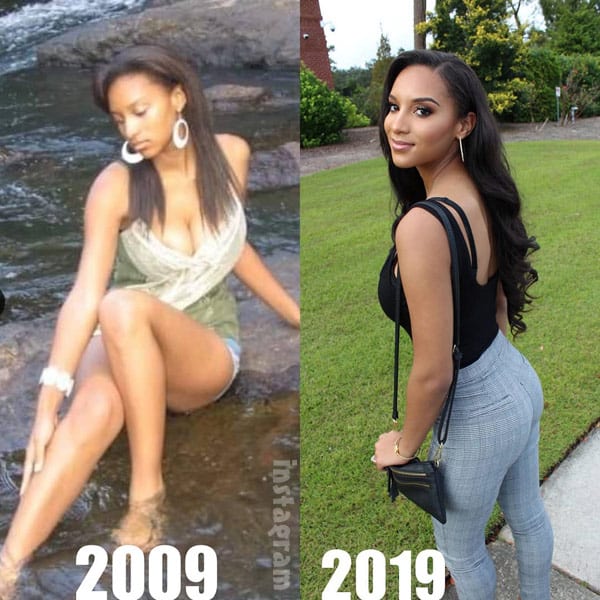 “Baby don’t you know what you are ?” Chantel began the caption for the photos above, adding a string of hash tags including #allnatural. Then, in parentheses, she wrote: “and the answer to your boob question is…..”

We previously addressed the question of whether or not Chantel has breast implants in a similar manner, with lots of older photos that seem to prove that she has not had breast augmentation surgery. Or, if she did, she had it VERY young. (Just click the link for the “evuhdense.”)

Pedro and Chantel being on Happily Ever After is not a major surprise as photos surfaced in December of them filming in the Dominican Republic. We had a production source tell us back in November that some of the other couples filming for the new season included Jay and Ashley, Eric and Leida, and Colt and Larissa. It’s unknown which (if any) of them are still filming given what has transpired since November.

Eric and Leida have become so despised by viewers that they are not entertaining to watch for a lot of fans. Jay and Ashley have apparently split, but it’s hard to believe anything with them, so who knows?

And, of course, there’s Colt and Larissa. In case you somehow missed it, Larissa was arrested for domestic battery for the third time on Friday after she and Colt got into a bloody altercation. Colt filed for divorce later that day. Larissa has talked about Colt’s Happily Ever After money repeatedly on Instagram, so it seems definite that TLC was filming them. But, will they continue? Like Eric and Leida, it’s difficult to gauge whether or not viewers will even want to see Colt and Larissa’s story given all of the domestic violence ugliness.

Paola and Russ Mayfield have also hinted that they will be back yet again — which makes a little more sense given the fact that she was pregnant and the couple just had their first child together.

Another couple that will reportedly be returning are fan favorites Nicole and Azan, with reports circulating that Azan’s visa was denied and the couple will film some of their segments in Grenada? ?‍♀️

Anfisa has been very open about her and Jorge not being back again — due to TLC and producers not being willing to meet their salary demand.

Unfortunately, we’ve been told that Happily Ever After couple David and Annie will not be back either.

Paul and Karine look like they are filming again after he had previously indicated that TLC did not want them back. I am guessing that is not for Happily Ever After, but instead another season of Before the 90 Days or the new spin-off The Other Way (if Paul stays in Brazil).

Speaking of Before the 90 Days and The Other Way, one potential unexpected curveball for fans is that we’ve been told that Before the 90 Days couple Larry (McDonald’s manager who cashed in his 401k and was reportedly hoping to start a career as an RV YouTuber) and his Filipino Cupid bae Jenny are filming again! If they are, I assume they will be like Paul and Karine and will probably not be on Happily Ever After.

Here is Larry’s update on Jenny’s immigration status from September:

We finally passed our medical exam. We are very happy, but now we just have to do our interview. We love each other and we’re so excited to be in each other’s arms. Please say a prayer. We finally can be in each other arms and get married and love life. Thank you again Larry and Jenny.

So who are you most excited to see on the new season of 90 Day Fiance: Happily Ever After?