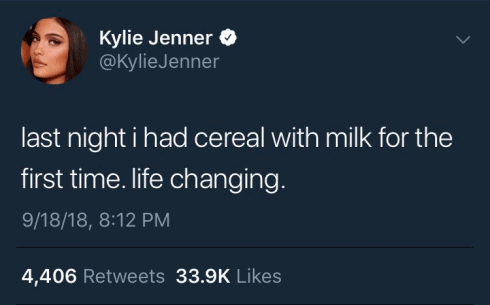 Last night the hottest tea on Twitter was the Kylie Jenner had never before tried putting milk on her cereal. When she did, it changed her life so much that she tweeted about it and the knowledge of this life changing event launched an avalanche of more tweets and the general public tried to processs this information.

“Wait till you try peanut butter and jam,” Seth Rogen chimed in because clearly Kylie has lived a very sheltered, poor-little-rich-girl kind of life that’s kept her away from the simple pleasures the rest of us enjoy. Either that, or this is further proof that we’re living in a simulation.

“Last night I had cereal with milk for the first time,” she tweeted. “Life changing.

The simplicity of her tweets are actually pretty poetic and they spurned even more conversation about the beauty of cereal with milk. Kylie revealed she’d always just eaten it dry because she preferred it that way but once she gave milk a chance, milk has really impressed her.

When asked what kind of milk she used, she revealed it was “regular,” while implies it was probably dairy milk. However, she’s open to trying Almond milk next time. The type of cereal was Cinnamon Toast Crunch, a wise choice. Now that Kylie has discovered this culinary treat, hopefully she’ll pass on this knowledge to baby Stormi. 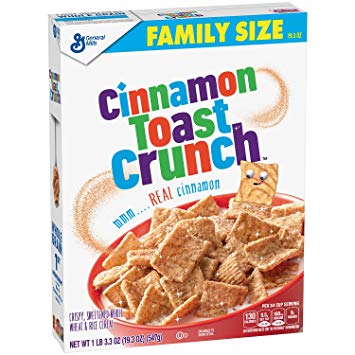 Amber Rose canceled: Star’s reality show gets the ax before it even airs